Trekking routes through numerous mountainous regions of the world where the OutdoorUkraine team is organizing hikes. The main destinations of our tours are the Carpathians, Turkey, Nepal, the Caucasus, the Alps, Norway and Iceland, the Balkans and the mountains of Central Asia.

For the full schedule of trips for this season, look here 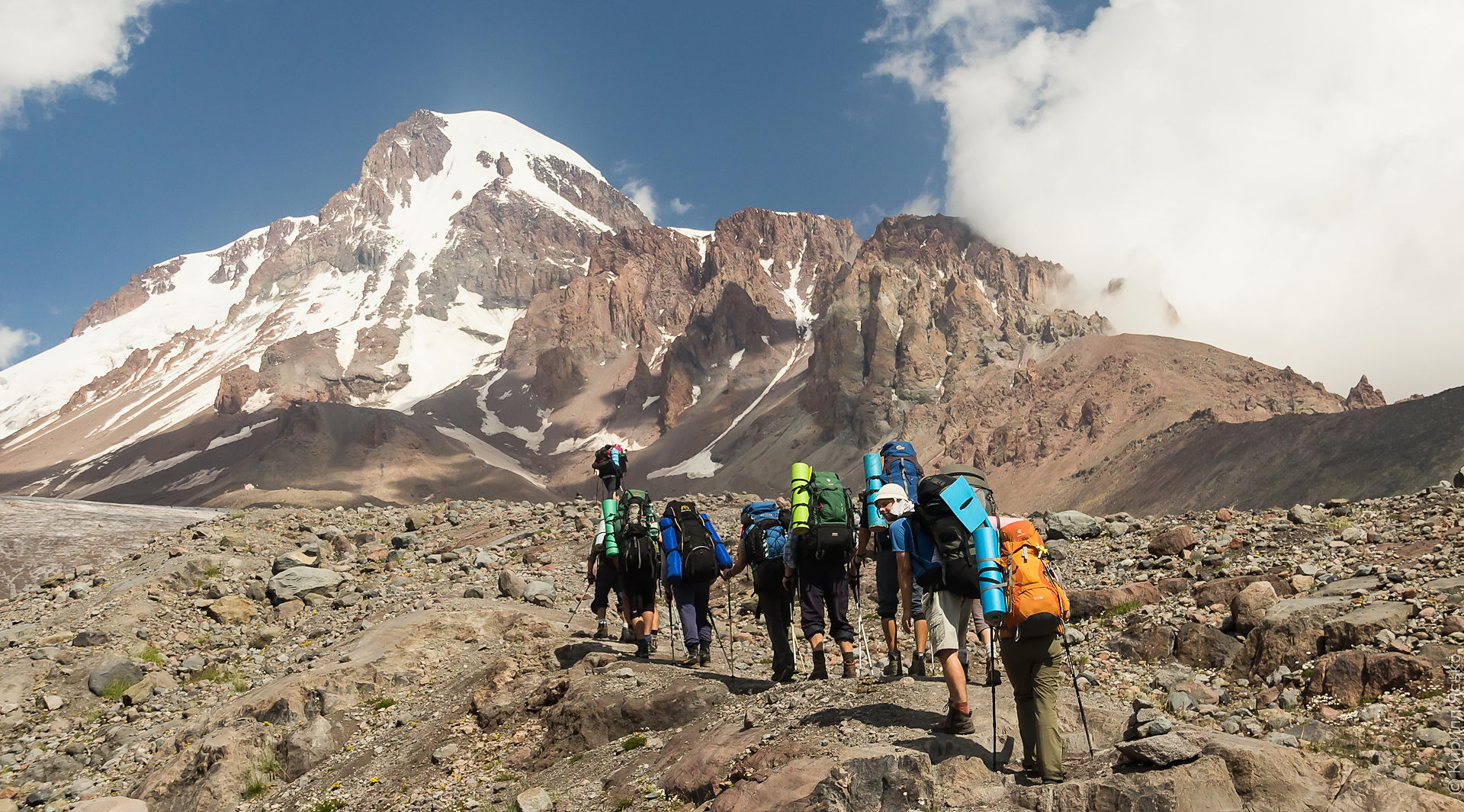 To understand the peculiarities of the ascent to Kazbek, it would be logical to compare it with the ascent to Elbrus. On the one hand, Kazbek is simpler, there are no volcanic gases in the atmosphere and it's much easier to breathe. The same miner usually starts here only at an altitude of 4800 m - on Elbrus she can easily "attack" another 3600 (even with the correct acclimatization schedule). At Kazbek, the assault camp is much closer to the summit, on the day of the ascent it will be necessary to climb only 700 meters (from 4300 to 5033 m). For comparison, storming Mount Elbrus from the North, it is necessary to fly up to 1900 meters per day (from 3740 to 5621). But on the other hand, on Kazbek, the road to the summit passes through a much more rugged terrain - there is a very steep slope with a huge number of cracks. Therefore, almost all the time we will move around in bundles. We must not forget about rockfalls ... In general, it will be fun - join :)

"Hiking to Kazbek" - Trekking in Georgia

Going to Kazbek is not a climbing climb to the summit (although we also know how), but only slightly complicated trekking (hiking) to the most famous mountain of the Caucasus ... By the way, did you know that it was here that was chained to the rock Prometheus? So, its already released - we checked :)

This is one of the most beautiful and mysterious routes in Crimea. Over one week you will see such Crimean wonders as the Valley of Ghosts, solution caves, waterfalls, and medieval ruins. You will observe picturesque mountain sceneries. Each day of the trip will bring you new impressions: beech wood, shady gorges, fantastic rocks, plateaus covered with multiple sinkholes. If you have never been in Crimean Mountains, do not hesitate to choose this tour. 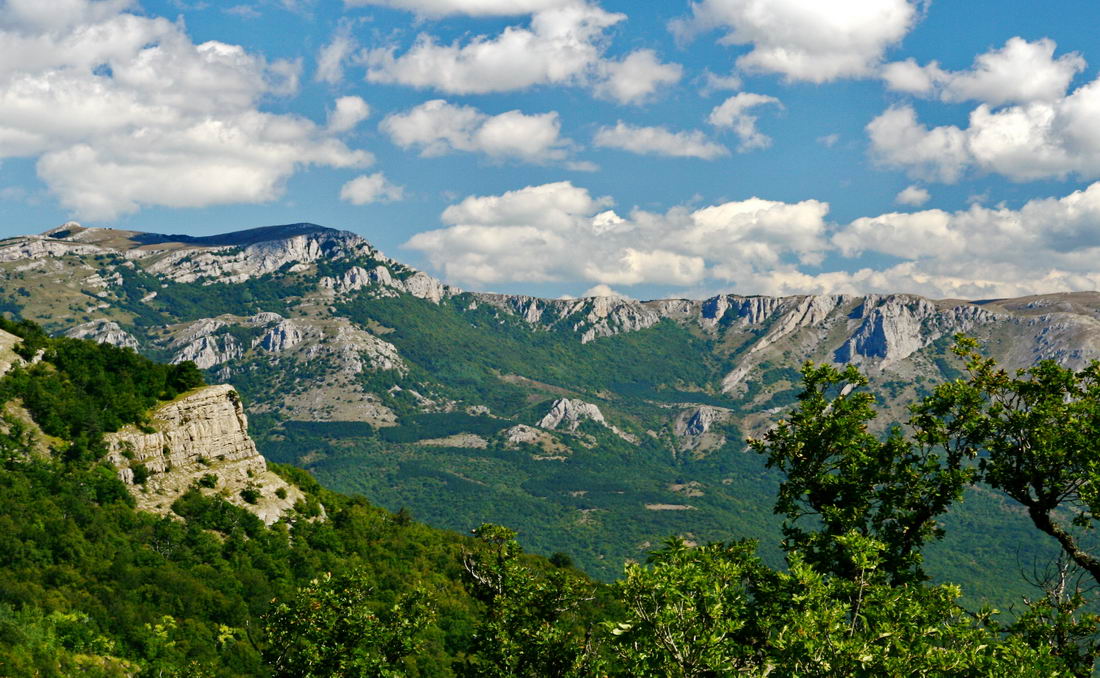 Crimea, 6 days. 75 km. 1500 grivnas (5500 roubles), Complexity: the high
It is an extreme mountain campaign. Unlike other routes, here it is necessary will not only go, but also to work with ropes, to climb on rocks. Numerous descents djulferom, a rope crossing over a precipice, training on organizatsiii salvage operations are coming you. Thus from you it is not required any special skills or special preparation - you to all will teach. The group is accompanied by two skilled instructors. All necessary equipment (ropes, helmets, carbines, obvjazki, the trigger device) is in our hire. 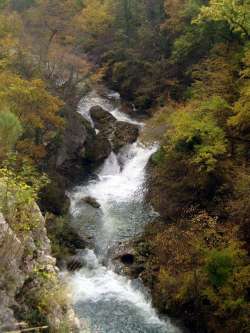 This hiking trail  leads through the 3 finest canyons of Crimea peninsula. In the center of a huge stone arch of the western part of the Main Ridge of Crimean mountains there are Ai-Petri hills. Big Canyon, having huge interest of tourists, is situated on its northern slopes. Another one great canyon is near Sebastopol in the valley of Black river (Chernorechenskiy canyon). 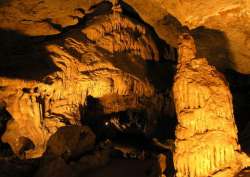 This trekking tour takes place in guerrilla places of Crimea. The guerrilla camps lost in mountains, secluded caves, almost tropical wood. All this served as shelter for the guerrilla during war and for the period of a hike becomes the house for us. The route is knowingly named "Orient Express" - moving on the east on guerrilla tracks, we of all for some days shall reach Noviy Svet and we shall finish our hike near Sudak fortress.

Above the Sea - Backpacking tour in Crimea

Crimean mountains raise from the Black sea and stand like fortress wall. So its possible to walk along this wall above the sea. A bird's-eye view makes seaside resorts more pictorial and attractive. Besides, you will save your money.

In south-west of Crimean peninsula there are very interesting Middle Age monuments - so called Cave towns. They are very similar to Cappadocia caves and situated on separate rocky plateaus of the Inner Ridge of Crimea mountains over wide valleys of Alma, Kacha and Belbek rivers. The best way to see them all - our hiking tour through this ancient land.

3 days, 40 km.  90 Euro.
Vicinities of Sevastopol long time have been closed for free visiting - too much there was military bases and confidential objects. One of such places - cape Ajja. This most beautiful place of Crimea and without that attracting tourists, owing to an aura of the strict privacy and absolute mystery finds the special status. In general, you should see it :)

This hiking tour is compilation from two other popular routes. The first part of the tour takes place in the well-known Cave towns. In the second part we shall admire the Grand Canyon of Crimea, ascent to  Ai-Petri and will go down to Yalta.

3 days, Distance:40 km. Price: 90 Euro
Do you know what is Demerdzhi? It is magic mountain. You can walk around till the end of days - so fine is it. We shall dare to give it only 3 days and try to get acquainted with its miracles: the Valley of Ghosts, cave MAN, Crown Demerdzhi, waterfall Dzhur-Dzhur and Dzhurla, gorge Haphal and a lunar landscape of a plateau. 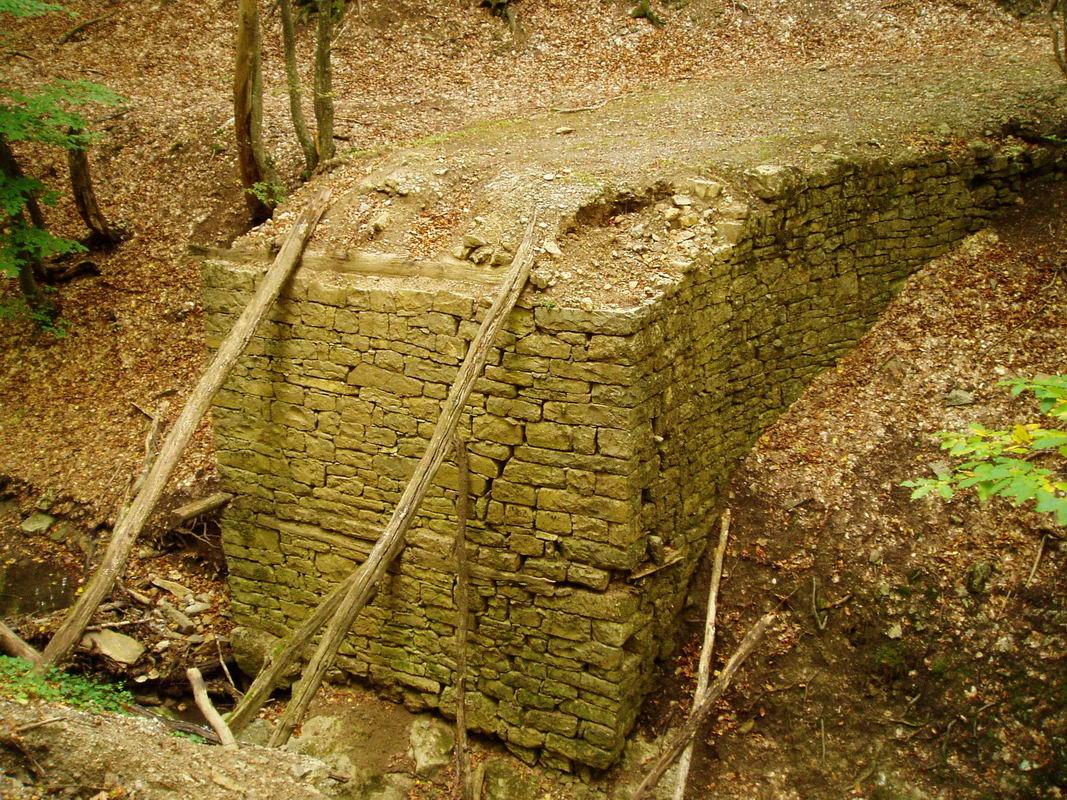 Crimea, 3 days, 30 km. 70 Euro. Complexity: average.
How to get to the sea? It is not difficult - it is necessary to begin on a strawberry glade, long to go through beechen wood, to stay the night in a birchwood and then to a sharp stone crest so unlike flat Crimean mountains, to run to the sea. And there both cypresses and a viscous smell of a juniper and ancient Tauris have adjusted something specially to our arrival. A relax...
Simferopol - Zemlyanichnoe - Wet Indol - Maski pass - Ay-serez - a ridge of Orta-Syrt - mountain Ambulapla - Veseloe - the Kutlaksky bay - Karaul-Oba -  Imperial beach - the Golitsynsky track - Novyi Svet - Sudak.

It is the extended version of a superpopular route " Water and Stones " (9 days instead of 6). Due to it(this) and without that the various and sated(saturated) route becomes simply universal. Every day ways - a new landscape. You will see: the Valley of ghosts, karstic caves, falls, deep canyons, medieval ruins and stupefying mozhzhevelovye groves. We shall pass(shall take place) 4 mountain plateaus: chatyr-сбъ, Northern and Southern Demerdzhi, Karabi. And toward the end we shall leave directly to the sea in area of New Light. If you still never were in mountain to Crimea, choose this hike - will not lose. The nearest arrival - on May, 2nd, 2009. 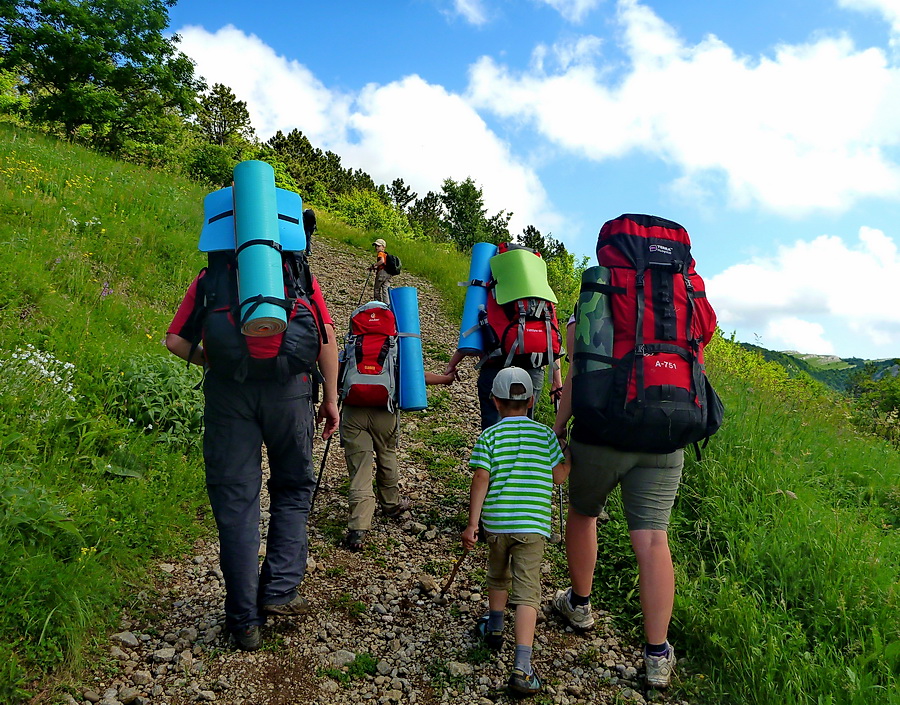 Crimea, 3 days, 25 miles. 600 hryvnia (2400 rubles). Difficulty: Low.
This version of the route of Demerdzhi (the most beautiful mountain in Crimea) for "children" groups, ie consisting of parents with children. In such hike can take children from 5 years. The route is simple, but still it is the mountains, so the child will need constant supervision. And in some areas will have to lead him by the arm. Therefore it is desirable (but not necessarily) that the child would be accompanied by both parents - father drags a heavy backpack (tent, food, sleeping bags, clothing, etc.), and my mother has a child. Usually, the group recruited 3-4 families - children and adults more fun to go to the company. Children aged 5 to 8 years 50% discount, from 8 to 15 - 30%. But really, children older than 13 years can safely take into the adult version of a hike around the Demerdzhi. 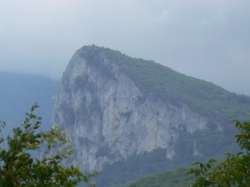 The route of a hike is developed specially for May holidays 2009. It is valid Romantic Collection - the collection of the best that is in Crimea. For the beginning places known and superpopular: the Grand Canyon and the Ai-Petri. But the further, the will be people and more nature less: hollow besh-ФС¬ЎС, the Devil's ladder, Forossky an edging, bay Laspi, cape Ajja. And toward the end - the SEA! Night on a wild beach the Fig and finish in magic Balaklave. The nearest arrival - on May, 2nd, 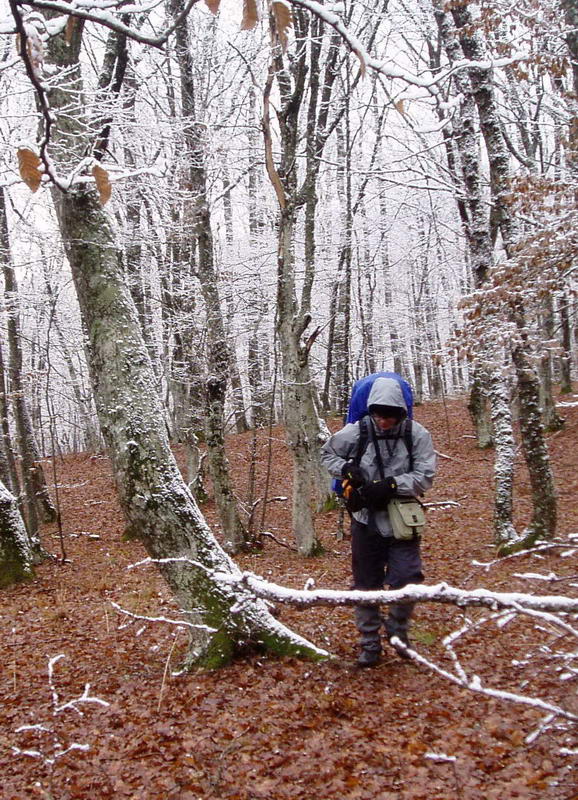 6 days. 65 km. 220 Euro. Complexity: high.
" An ice and Stones " - the winter version of the most popular tourist route in Crimea - Water and Stones. On the Crimean plateaus since December on the middle of March the present(true) winter reigns. Landscapes familiar to each tourist get especial smack. It is not so warm (and as many think "neseryoznyj") Crimea, and the present(true), "high" mountains with snow caps at tops and serious character in a head.
Simferopol - bottom plateau chatyr-dag - cave emine-bair-hosar (or Marble) - Eklizi-Burun - Angarsk pass - glade MAN - Crown Demerdzhi - Dzhurla - a plateau Northern Demerdzhi - plateau Tyrke - plateau Karabi - Rybachie 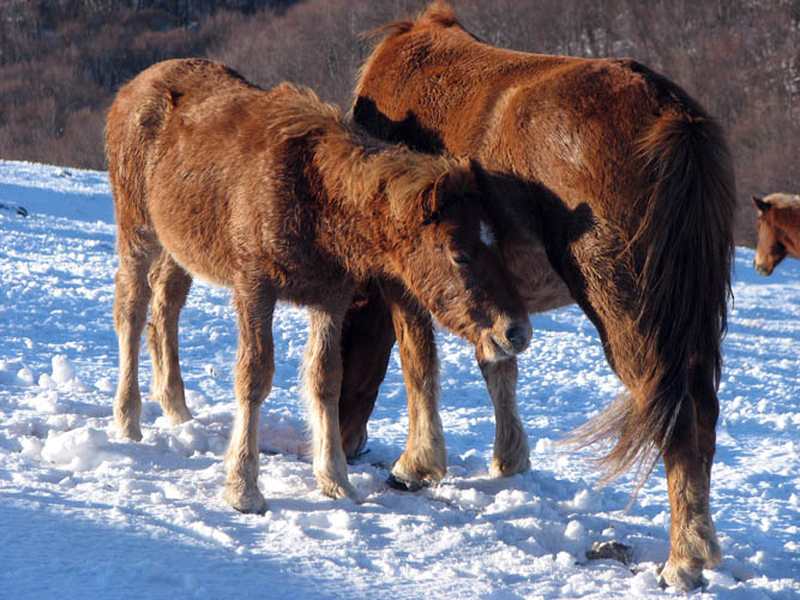 3 days. 30 km. The price: $ 120
Fresh "northern" sight at traditional miracles of Crimea: white and zasnezhennye the Valley of ghosts, cave MAN, the Crown Northern Demerdzhi.
At demerdzhi-яйлы reputation of the warmest and solar mountain plateau in Crimea. Listen: at bottom SOUTHERN Demerdzhi in RAYLIGHT village PEACHES grow. In the winter here too is warmer, than at other, more severe Crimean tops. When the sun shines, on a southern slope in a T-short to go it is possible. But it is necessary to rise on a plateau and.. The iced over trees, karstic voronki fallen asleep by a snow and a bitter cold. 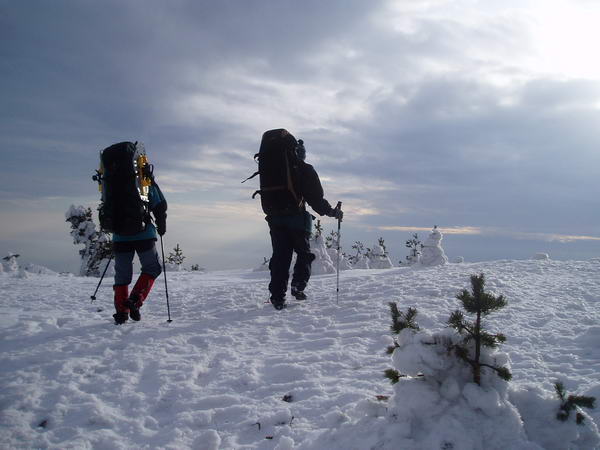 2 days, 20 km. The price: $ 100
In the winter Novel Kosh (the highest top of Crimea) it first of all boundless snow open spaces. All huge plateau Babugan is swept up by a snow. Here the Far North and reminds nothing that all on one and a half thousand meters below, in Gurzuf, palm trees and cactuses grow.

Speleotur on caves of Chatyr-Daga - surprising acquaintance to the fantastic underground world. By means of special equipment we will get into depths of an underground kingdom of this giant file. Kingdoms freakish and surprising kaltsitovyh formations, fantastic forms natechnyh the columns covered with crystals, surprising stalactites and geliktitov. Air temperature in caves of +9 degrees, and it means that we can comfortably walk in mysterious bowels unlike winter not always a friendly surface. The camp at us too will not be - we will take place in a mountain camp site where it is warm and cosy.