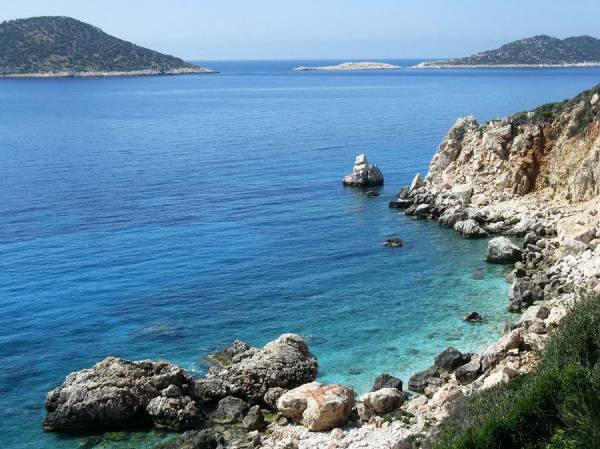 Some opening made in a campaign across Turkey (a route "Start of the way").
Vague representations about Turkey from school textbooks of history, fiction - an image of the country aggressive, rigid voitelej; the countries of backward, world culture huddling on boondocks.
The first trip to this country has reversed these representations.

Shock 2nd. Fethie - the small town, whence begins the Likijsky track. We go on a minibus to local sights. And suddenly in huge rocks it is visible - Greece! It appears are the rocky tombs imitating the Greek architecture. Singularity likijskih tombs consists that sarcophagi were established on a high rock, instead of hid in caves. 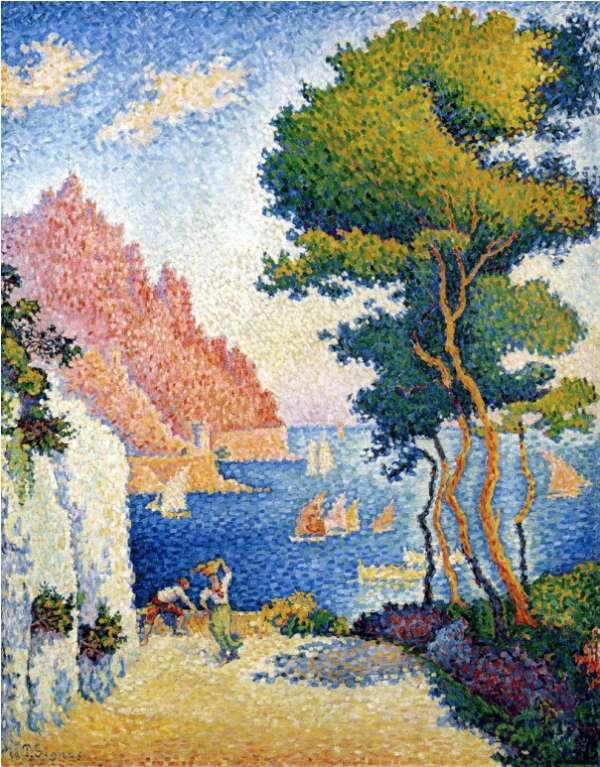 Shock 3rd - melancholy:). The first day - 3 hour transition: from the plane through Antalia, Fethie - to a place of the first spending the night. The beginning of a route not so impresses something. It seems that the Likijsky track was laid not on the blazed national ways, and is artificial. All is covered small sharp shchebenkoj. Really so there will be all 12 days!!! We pass by any not completed country houses - completely not romantic. The part of our command has begun a route after 3, 4 sleepless nights. Heavy! Hot! Not to lyrics! And where magic, southern, exotic aromas? After the first supper has tried to wash a pan habitually broken bunch of a grass, but about, horror! - it has appeared awfully smelly, hardly hands has washed!!! Fortunately, the further route only pleased with aroma of a citrus, needles, a sea pungent smell!!! After all the Likijsky track is laid mostly on high rocky coast of Mediterranean sea. Shock 4th. The second day of a campaign. It is necessary transition lasting many hours. With water full uncertainty (on a map there are springs-wells, but whether there is now in them a water???). We fill in plastic bottles from a powerful spring-source. At everyone on two-three litres in a stock. Here the next shock - deep sources on the way set, and they are equipped with the greatest love! Sometimes the small pool is there and then built - it is possible even to plunge. 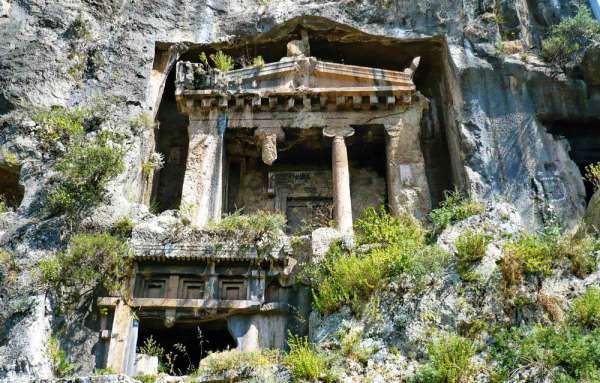 Shock 5th - tasty We have met a wild orange. That is the orange tree growing on a roadside of road, with set of the resung fruits which have fallen down in a grass!!! And though oranges slightly tasted bitter, we ate them with the greatest pleasure! It was the second day of travelling. Dinner time has come. And here it was found out that ours perekusy, namely all tasty smoked sausage and cheese "has left" with parallel group. By the way, and in the Crimean campaigns organised by firm Outdoor, always qualitative, various products for a campaign, I think all remember, and tasty dried bananas, and candied fruits from pineapples, etc.!!!! Well, and in this campaign it was necessary to our careful head Cyril to buy for a dinner in local villages everyone vkusnjatinu - the house cheeses, stunned kajmak (is very tasty to smear on the Ukrainian small loafs), olives, tomatoes and cucumbers - as a result, dinners have turned out at us traditionally Mediterranean!!! 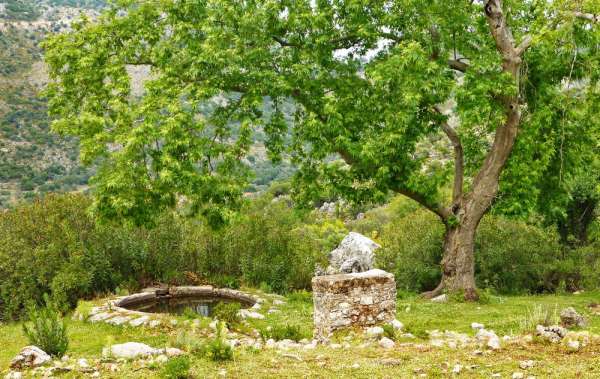 Shock of 6th In Turkey, as well as in many Mediterranean countries, wheat collect on 2 crops in a year!!! It is amazing to see a field of ripe wheaten ears near to blossoming poppies in the middle of May!!! (Cyril and Light photographed this miracle. It would be desirable to see these photos.) And poppies, how much them! Truth and prickles suffices)))! Anywhere and everywhere this krasotishcha!!! 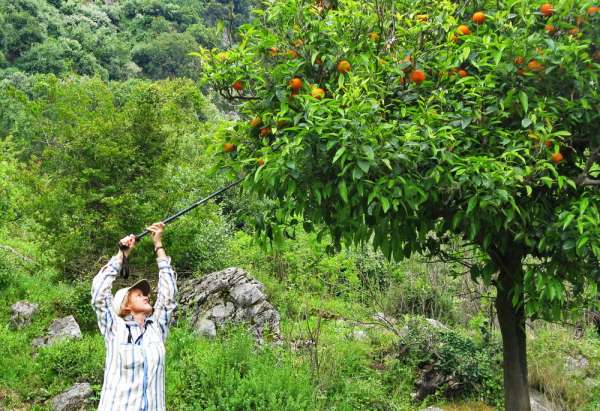 Shock of 7th - Bible motives. In one of days of a campaign, the Likijsky track has got us on a certain high rocky breakage at the sea. Very beautiful, but spending the night there it was possible to arrange breakage only in hammocks (it is a pity have not grasped them in campaign J), hung up on fancifully bent pines.

It was necessary hardly to return. Cyril, with udja on everything, the person very educated, has suggested to stay the night in an olive grove, having remembered thus about last night the Christ in the Gefsemansky garden before crucifixion J! So we with alarm expected occurrence of local residents. But the grove was so is tempting! Yes unless we could though for a minute to present that we will once spend the night in an olive grove!!! Also are again remembered - favourite impressionists: 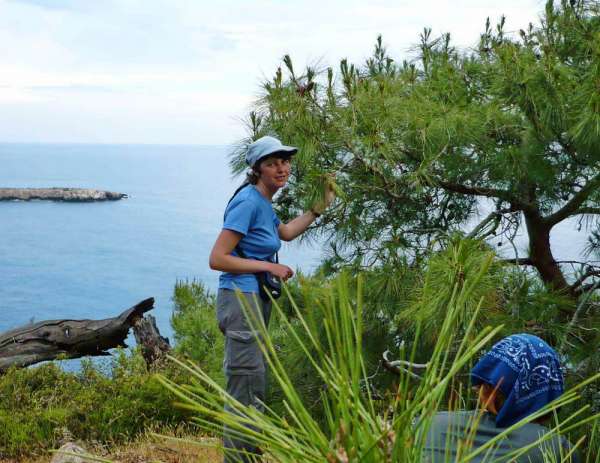 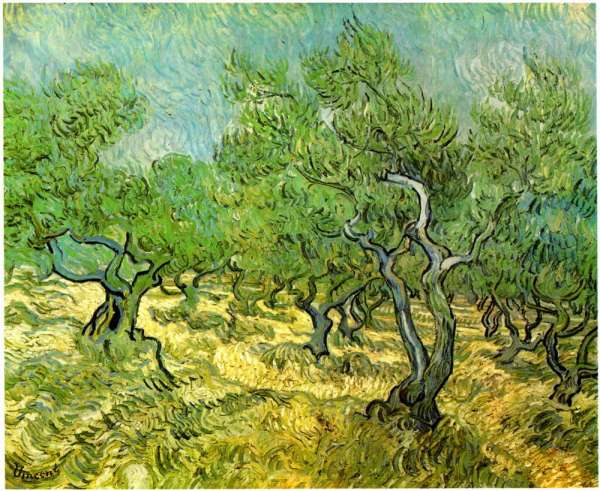 Van Gogh - the Olive grove William Merit - the Olive grove Shock of 8th Deserted sandy beaches! Certainly it is Patara - such expanse!!! After a campaign has read in an Internet article “Ten best beaches of Turkey”. Here a slice from it: “… In 75 km to the south from Fethie the Best beach of Turkey nearby to small resort settlement Patara (Gelemish). The strip of a beach with excellent white sand lasts on 20 km. An excellent place for those who loves a solitude. The settlement Patara exists not first thousand years, and there is no time served as the main harbour of ancient Lycia. Here under the legend Sacred Nikolay (become subsequently Father Frost) was born. In 1,5 km to the south from settlement interesting antique ruins are located - among other it is necessary to note released of a captivity of sandy dunes an amphitheatre, a triumphal arch, nekropolis …” 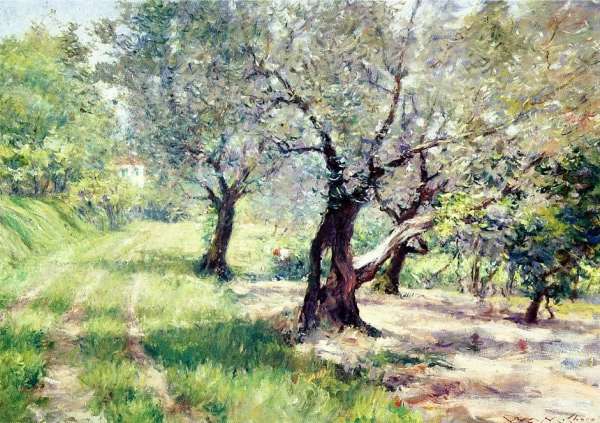 And again from an Internet: http://turist.rbc.ru/article/28/06/2010/200581 Here a slice from it: the English edition guardian.co.uk has prepared the list of 10 best, but little-known Turkish beaches. Kabak “… if you have stopped in a village of Faralija, but descent in« the Valley of butterflies »has seemed to you too difficult, choose an alternative variant: 15 minutes on the journey - you on beautiful small-galechnom a beach the Tavern. Here you will not find anything from habitual conveniences, some campings in a distance. The beach is surrounded from three parties by magnificent pine wood, this best place for those who likes to have a rest on a bosom of the protogenic nature...” And we here were! However, during a bad weather. Our darling, gentle Marina bathed on this beach! The others at this time, shivering from a cold, muffled up in capes under a torrential rain!!! 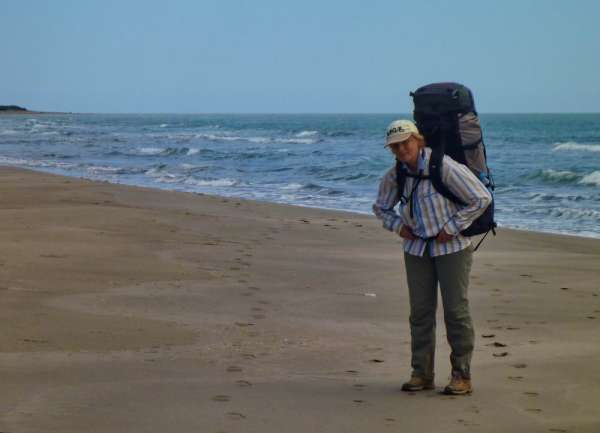 Shock 9th Culture monuments. Again from an Internet: “… Such quantity of architectural monuments is not present, probably, more anywhere. They even cannot be listed - necessarily something yes you will forget. And to look, you should spend in Turkey not one month. However, you will not regret about it. And the most surprising is that practically all of them - different. The different styles, the different traditions, different cultures - result surprising and delightful.” Yes, even on our short route of monuments there was a set! And this inexpressible miracle - to put a palm on heated-up the sun, a rough stone with the letters beaten out on it, a stone, to which not one thousand years!!! 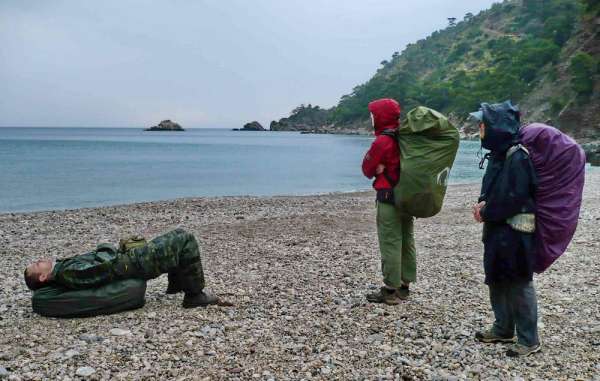 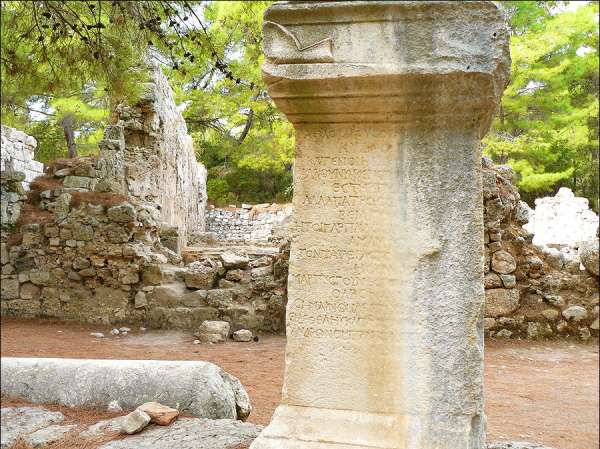 Shock 10th At the first, "civilised" visiting of Turkey was pleasantly surprised with affability and manner of Turks. But it it was possible to charge to service, obligatory hotel for employees. But also on our route far from resort places, any meetings with inhabitants of this country, any sure gain from us not expecting, always differed the person dushevnostju. To take at least a case when on last our parking it has not appeared waters and courageous Cyril, having filled all free capacities the backpack has gone on its searches, already in full darkness (though we and suggested to be limited to those one and a half litres of water that else remained with us): By us there passed pair of local residents (came back from sea fishing). We have tried gestures and any Turkish words, type: “Ljutfen, water nerede?” To find out, where water. And they, as if apologising, repeated in the answer: “Burada jok!”, “Burada jok!”, “Burada jok!” Also it was visible that they awfully regret that cannot help us. In our Russian-Turkish phrase book, strangely enough, there was no word "water". There were words "juice", "tea", "coffee" - "water" was not! And we have decided that "burada" is and there is "water". Only then we have found out that they tried to explain to us that waters: “Here is not present!”, “Here is not present!”, “Here is not present!” From the book LEWIS R “OSMANSKY Turkey. The LIFE, RELIGION, CULTURE.”: “characteristic feature of Turks is politeness and manner, they with pleasure are ready to help strangers. As all east nationalities, Turks are slow, do not differ a pedantry, for any conversation including business, presence of introduction expressions is obligatory. Turks respectfully concern people who are informed on their traditions, in particular to those who knows some Turkish offers. For such person the Turk will give any help.” “… the Local population is unwillingly photographed because of Islam interdiction but if friendly to ask, it is possible to obtain the permit to photographing. It is not recommended to remove without the permission is can strongly anger them …” And we have just asked of the permission, and here pictures: 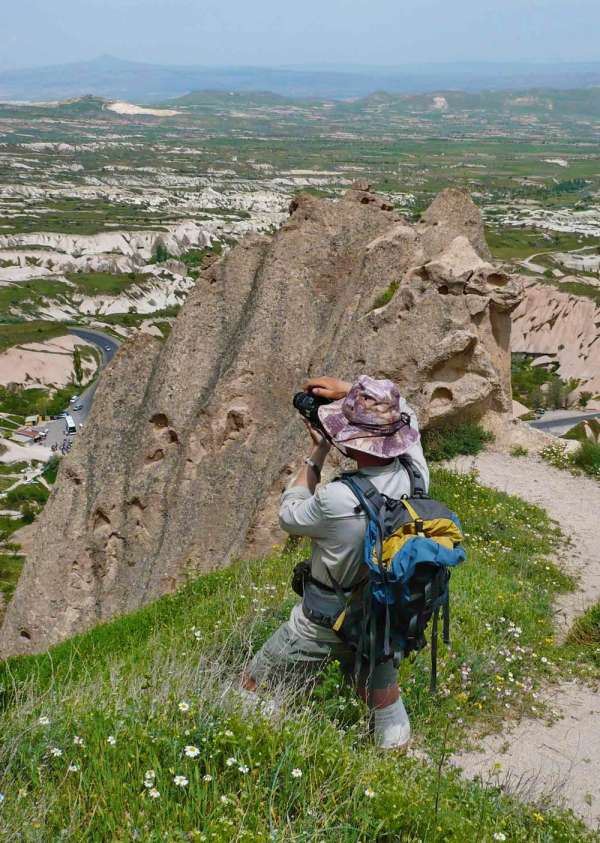 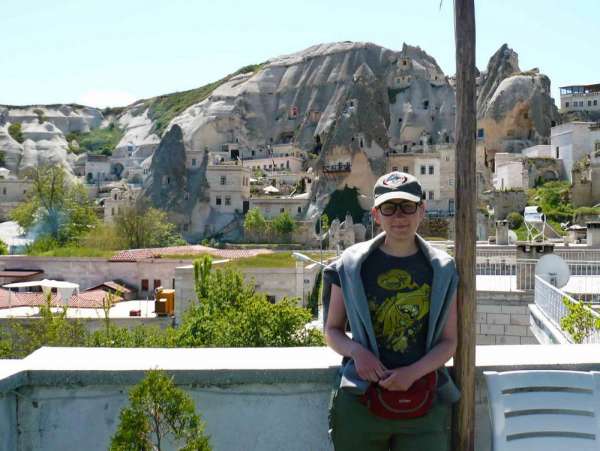 Fishermen Epilogue. Cyril, very much would be desirable to return to Turkey, with Outdoor as you dream to reconnoiter new routes! And still to eat yours vkusnejshih supchikov for a supper when the taboo is at all forgotten - “not is after 18.00!!!” On a photo kitchen of a camping, a place of unique civilised spending the night of ours zamechatelnejshego a route. 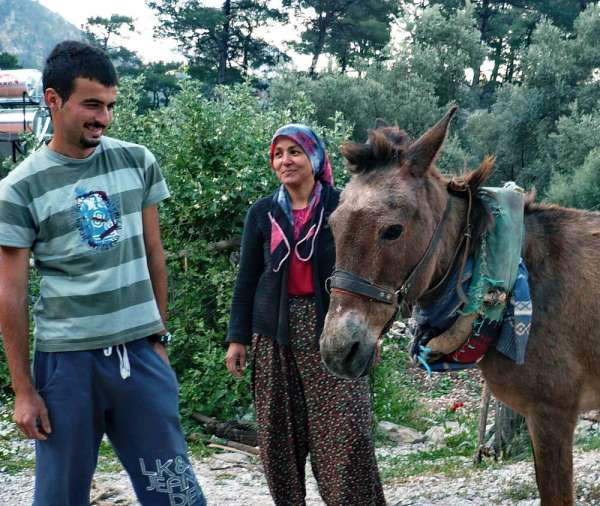 Cyril, you remember, in the bus to Antalia we have started conversation on terms: "Turks", "osmanli Turks"? Here from an Internet: “… It is necessary to understand word meaning« Turks "and" osmanli Turks ». In this book (Rafaela Lewis Osmansky Turkey. The life, religion, culture) a word"Turkish"is used how it is accepted in the West where does not become distinctions between Istanbul and other country, but Turkey is allocated from empire, though in a reality of such geographical integrity as Turkey, on a map of Ottoman empire did not exist. Certainly, there were territories with the population speaking mainly in Turkish language, approximately corresponding to initial captures by osmanli Turks of the earths in Anatolys and Rumelii, but they were divided into the administrative units submitting to the central government in Istanbul, by the same principle, as by other possession of the sultan. Concepts tjurkizma in national sense simply do not exist, just as there was no such concept, as «Turkish empire». In this sense even the concept "sultan" has come from the West. Suveren it was called in this territory by the padishah - in transfer from the Persian language "emperor". The word "Turk" was used for a designation of the peasant, and even bumpkins. So Anatolys speaking in Turkish language named the inhabitants. Ruling class, first of all suveren and government officials, considered themselves as osmanli Turks and Moslems, and though the religious solidarity took place, the formed city representatives of ruling class considered the people who were called as Turks, provincial yokels and representatives of "mean" estate. Each ethnic Turk, except for that were representatives of clergy or several outstanding military men and the statesmen who got education and have achieved high position in the power, has been firmly adhered to the place in rigid social hierarchy. In its representation, however, it was strong, dear place under system protection. Osmanli Turks have inherited a certain hybrid of Turkish language. In it great volume of loans from the Persian and Arabian languages contained. On it spoke rich and notable. Speech simple a Turk was considered as them "rough". Language of osmanli Turks was used in official bodies, Arabian - in religion sphere, Persian - in the field of culture and the literature, especially poetry. Only houses, far from extraneous eyes and, probably, from servants, osmanli Turks spoke on Turkish - language of inhabitants Anatolys...”
+38 097 327-86-98