Note of one hike 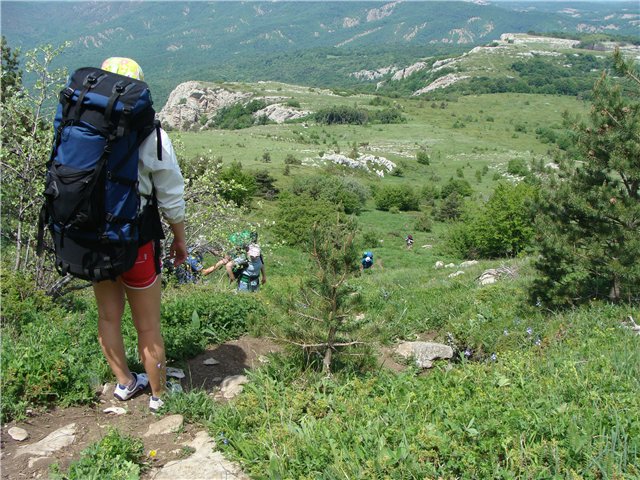 About a hike " Water and Stones " on June, 7-12th 2009.
We were first time in a hike, wished to receive new experience and emotions, to have a rest from the child and to lose a civilization. Everything, that wanted - we have received wholly. Proceeding from it(this), I have written these(it) of a note - basically emotional sensations. For those who searches new emotions... The first impressions
With start we take bottom plateau CHatyrdaga-500м-and the smell of a wood simply kills. Someone screws up the face, someone shudders, our conductor vigorously so speaks Andrey: « Yes, children(guys), here such here a unforgettable smell in all Crimean woods where tourists » … 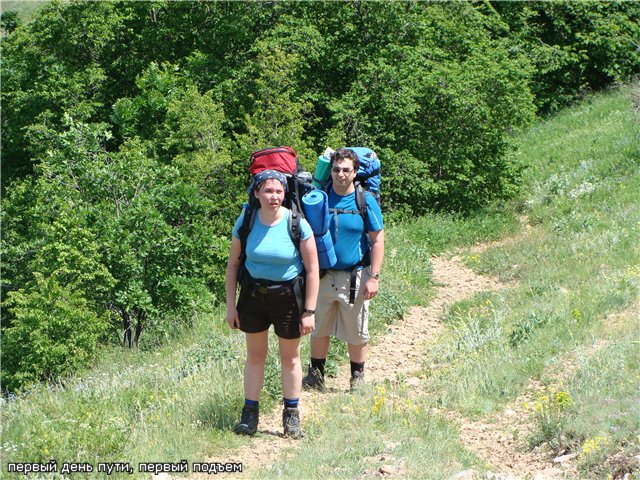 go
« Remember our persons(faces) »
On a way with us there was a group « women and children » as the conductor was indulgently expressed. Children have appeared hazardous and sensitive. Someone from us mimohodom has thrown it(him): « Remember our persons(faces). Now you will see only our backs ». Children have darted off, not having finished(stopped) a dinner, with frenzy have overtaken us and shouted from top: « It you will see our backs! » We have remembered children for a long time. Two more days they breathed roughly to us, competing where it is possible and impossible. It was necessary to our group to change a route slightly.
In steppe
Somehow there were we with Anej one on a mountain plateau in the afternoon to protect backpacks. As a matter of fact, a plateau looked(appeared) as steppe. Having collapsed on backpacks, it is squinted looking afar, inhaling unique aromas of steppe grasses, vnimaja to buzz of bees and bumblebees, we blazhenno have dozed off. Us serene rest, a pacification, feeling of return to sources, the nature, and even machines(cars) passing at our legs(foots) has seized(has taken possession) (that they there did(made)?) could not prevent to enjoy to us feeling of a unification with the nature when your consciousness is dissolved in steppe as sugar in water …
Stone grotto
The place of our first spending the night has appeared in a high juicy green grass at a stone grotto, far from a civilization, where even mobile communication(connection) glohla. At once contrast with a usual life - gathering of fire wood, a buckwheat cereal in a kettle with fat under the name "tushenka" was felt, the tea-wine-beer, the first detailed acquaintance … Slept(Burn) as shot. In the morning of the man went down behind water in a cave the Bottomless Well. As they said, impresses, it is a pity, we have not seen. And here emine-нбїУ-Х«ЯбУ has very much impressed, who was - will understand.

The heaviest rise
We again submitted(conquered) CHatyrdag. Rise on 500 m on the top plateau was remembered by all - we went as barge haulers on Volga, without hope for the fast and easy(light) end. The some people not dobredali … the Conductor, having flied up as a birdy upward, gave out pearls: « Here when you above so ridiculously to look at clambering people somewhere there, below » « I Love kozi tracks, sharp, not flat and longer to go » « Eh, would like I so to get tired as you … Well though slightly that is tired … Well I cannot … » From severe murder of a conductor have rescueed(saved) only a dinner. Our efforts have crowned the maximum(supreme) point of Crimea of 1527 m - mountain the Э¬¬Ѕїєї-breaker! (well almost the maximum(supreme), but we shall not specify …) For that moment all mountain has been borrowed(occupied) by an assemblage of pilgrims, priests in cassocks which there and then served service, and someone like the Ministries of Emergency Measures-ников protecting people Divine. 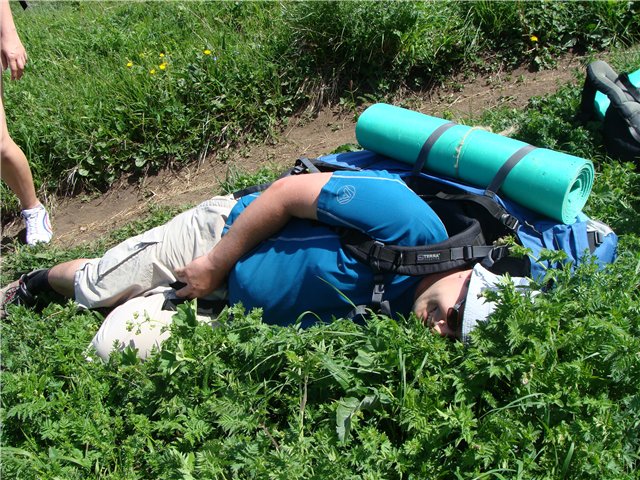 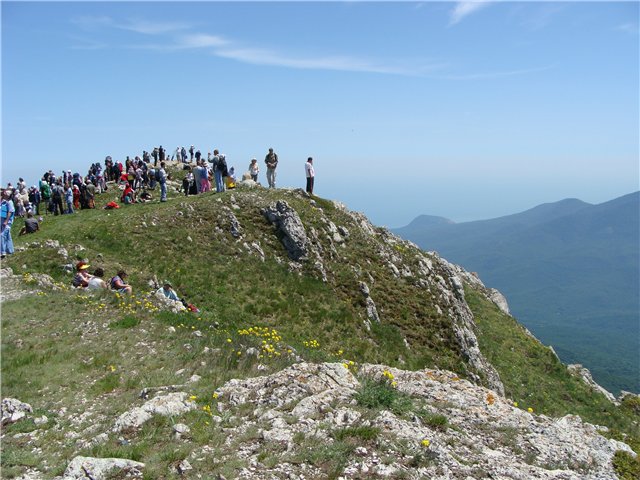 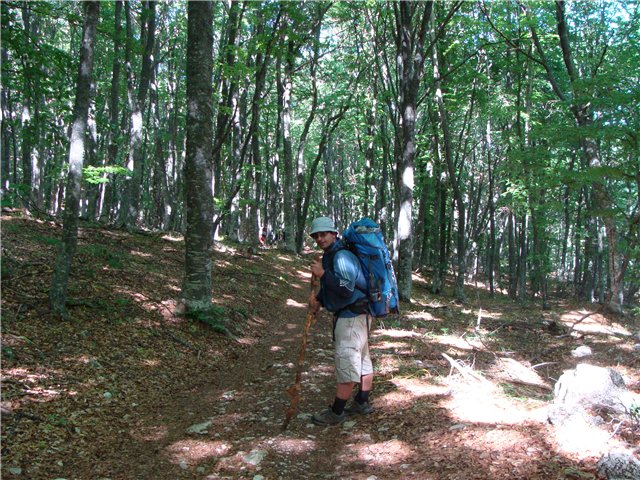 Loss of belief in a conductor.
In a beechen wood we were for a long time thrown with a conductor, having left in a unknown direction. Usually it(he) often escaped from group (with a toilet paper or in searches of new springs), but this time its(his) mobile did not answer, darkened, and mosquitoes bit all more strongly. Men send away(have left) to search Andrey, having left girls with the invalid. Got dark … When we nevertheless have returned in group of a conductor, it(he) was justified: « There the grandfather, it(he) did not know road, so I have lead it(him) … on a wood, on mountains … » It was heavy day, emotionally and physically. Promised by Andrey « here it is close, 5 minutes "and" 50 more meters » appeared in actual fact hour of walking and in pair kilometers on a cross-country terrain to a place of spending the night with senseless and severe quantity(amount) of mosquitoes. And here we have started to lose belief in a conductor, having assured, that nesprosta it(he) drives us kozimi tracks and pretends, that everything is all right. As the group has unanimously solved, its(his) enemy mission was to find as much as possible heavy, in long detour kozi tropki everywhere where there are good, fast and wide roads with the minimal difference of heights. Andrey lovely beat off, approving(confirming), that it(he) the creative nature and circulation on the same direct roads does not develop it(him) as the person therefore at it(him) the internal conflict with itself develops. Thus, our plan of a route was constantly corrected(adjusted) under creative person Andryukha. 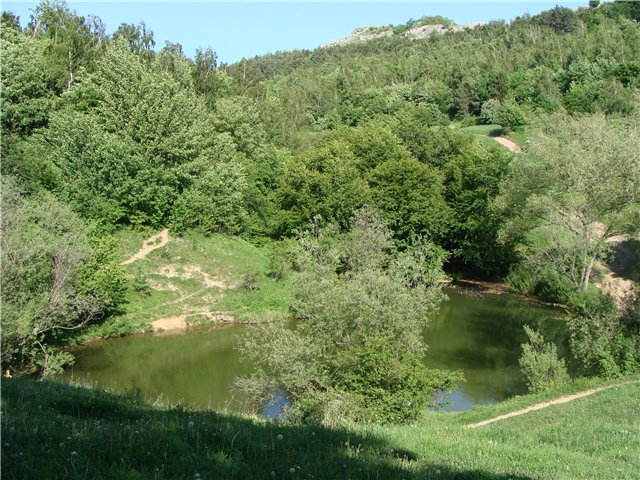 Lake paradise
All passes(takes place), and our tortures too. Having risen on pair-three mountains with picturesque names Curly Marja, Bald Ivan, Demerdzhi, we, eventually, send(have come) to the fresh(stale) lake forgotten deeply in mountains and woods of which long did not wish to get out, despite of ice water near which long sunbathed, having spat that it is necessary to search for fire wood and to make a supper. And in the evening tastefully played a mafia, the first by tradition killing a conductor.
Descent(Release) on « the Valley of Ghosts »
Yes, we have risen on top Southern Demerdzhi and have seen stone giants, a vast panorama of Crimea and the Soviet flag. It was 1200 with something of meters. But we paid off with lasting many hours descent(release) for all this on the Valley of Ghosts. Here we also began to understand how painfully painfully to lose gained then and at times blood height … the Some people went on the priest, before backpacks, others fell or prickles ran into stones, broke branches of trees in vain hope to stop, the third showed author's technics(technical equipment) of sliding on a local embankment. 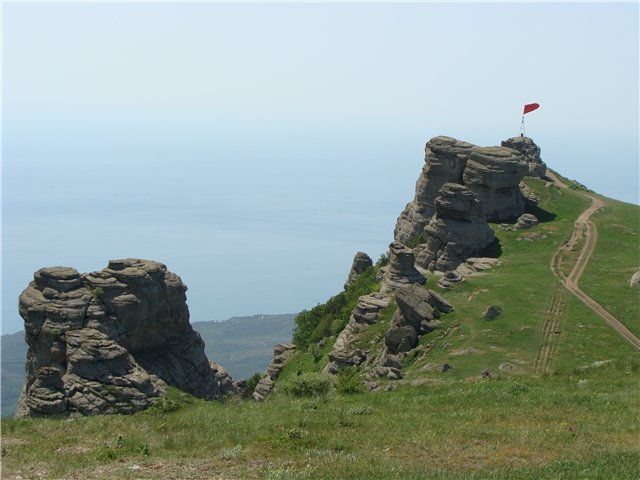 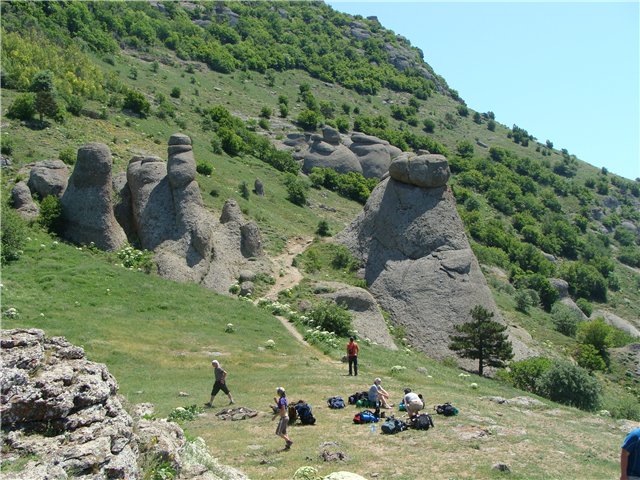 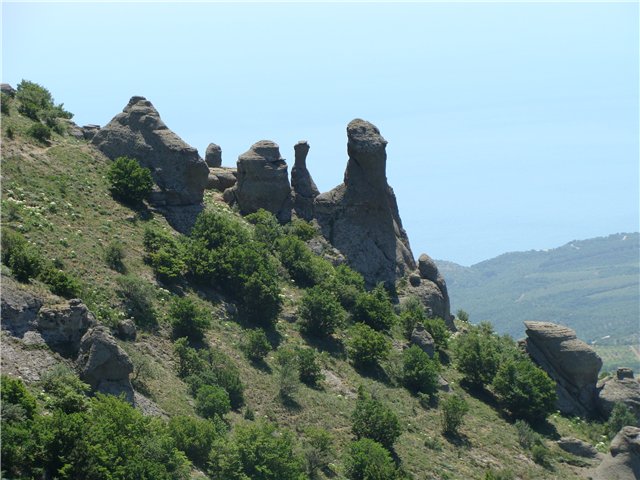 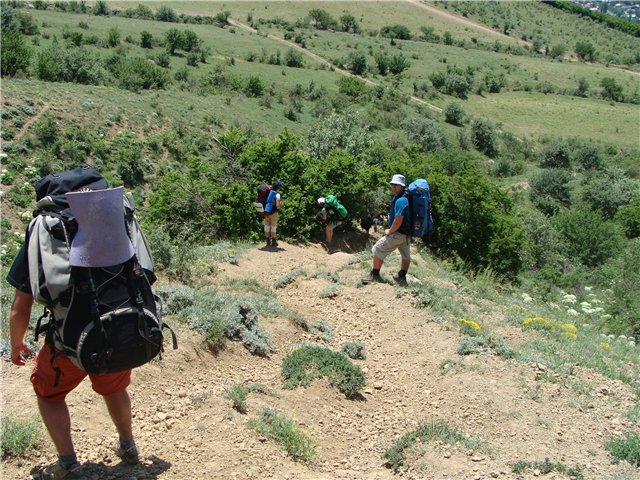 by this time of half-group went with redressed kolenjami. The things most demanded in a hike were: elastic bandage, saccharin, a citric acid (in group occured povere, not without our participation, that the citric acid reduces shchelochnost waters, raises(increases) acidity, approaching its(her) that to habitual to us to structure of water and doing(making) its(her) use safe). 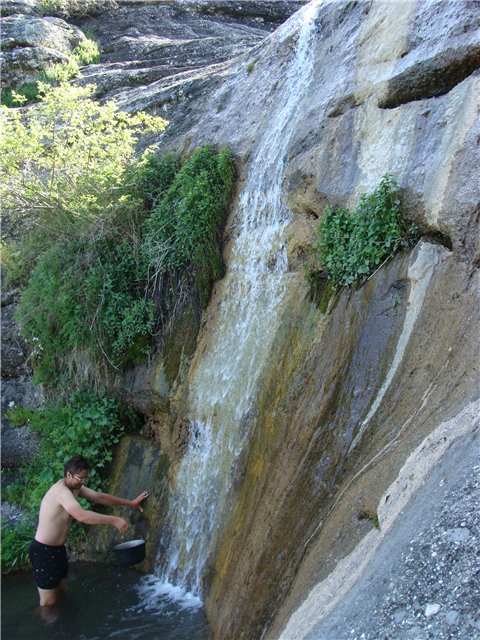 Dzhurla
Small, gentle, graceful vodopadik with small differences and trays of a youth has liked all. The female half of group has decided to locate there and has shifted on men all difficulties of the organization of a life. And in the evening we played the cow, it(she) plywood, it(she) the crocodile, and have got acquainted with two Americans, which travelled across Crimea with a card(map) in Russian.
Saccharin and other drugs
To all other sins of a conductor, it(he) has placed group on harmful tablets, replacement of sugar. And when Americans have unexpectedly come up from black as pitch, nights, from a wood and have asked for us some sugar, and Andrey has given them these tablets, naturally, they have asked: « Children(Guys), you joke of us? It that, a crack? » We long convinced them, that we not addicts. Have then offered them tea with the long, not torn mint from a kettle. I do not know, that all of them have thought of us, but saccharin and tea have taken … 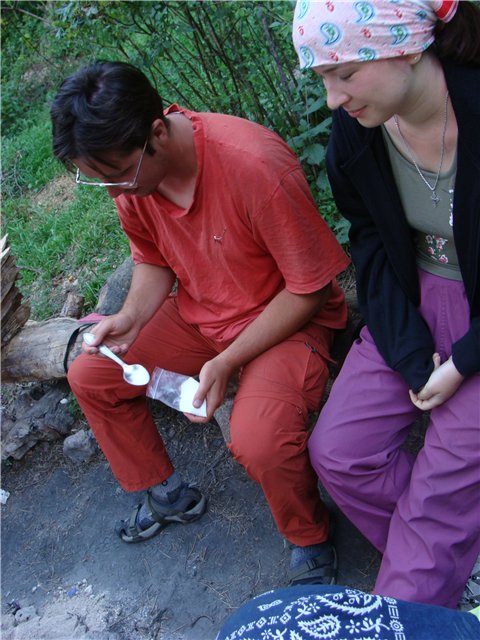 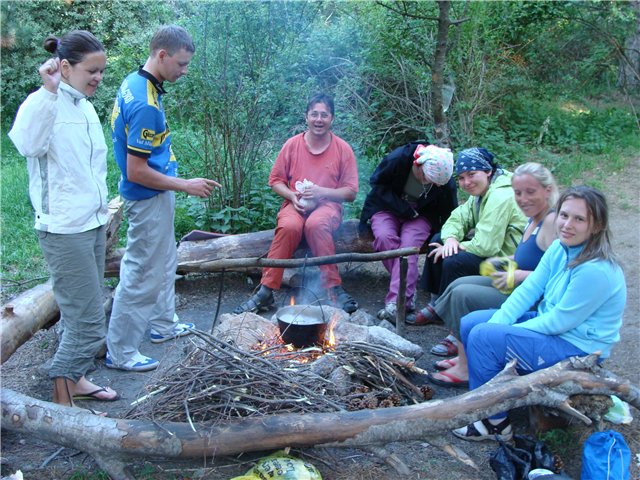 Plants and smells
During one lunch perekusa in mountains strongly pahlo mint, and we began to fall asleep one behind another and hardly were on the lam therefrom. As on makovom the field - stupefies it and weakens. From conversation: - It is necessary to go, and mint us weakens that.-yes, it is necessary to go. That now we shall relax and we shall fall asleep.-yes, we shall fall asleep.-was quite good. Let's lie down polchasika. ZHarko, it is necessary to have a rest after a dinner … - (All group) Yes!!! - (Through polchasika) well. Have gone(send)?-now, still minutochku …, etc. another Was remembered also: as we went midday, making the way through wild thrickets ipritnika, feeling sappers on a mine floor(field), without halts and respites. This(thus) fatally dangerous, and externally harmless plant: it is necessary to touch it(him;them) or postojat with a number(line) and to breathe - chemical burns are provided. Whether it is necessary to speak - uphill the group skipped without stops. 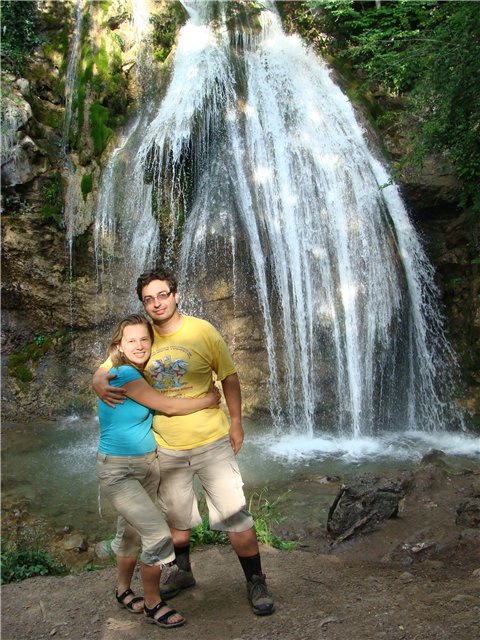 Actually, it was really dangerous, we went on « Novel tracks of Crimea »-likely, Andrey's favourite directory where people rather seldom go.
Dzhur-Джур
While we have reached it(him), forces not only at us, but also at a conductor have run low. At last! Unlike Dzhurly, this falls was majestic, mighty, indulgent to tourists and did not cause such darlings and tender feelings as Dzhurla. More likely, admiration, surprise, delight. Again bathed in a falls, and ice water for some reason any more did not cause such strong emotions as earlier …
About Andrey
Quickly having got drunk, all got to sleep, rises and descents(releases), and from tent where there lived a conductor with two guys dreamed us, shouts « Group, forward reached! Rise! », the wild laughter and sounds of knockouts … Next morning recognized Andrey nothing. In general the conductor has got cheerful and happy(enough) with a life, with fine sense of humour which all of us gained(helped) not time, and I wish it(him) not raspleskat desire to be engaged in favourite business! 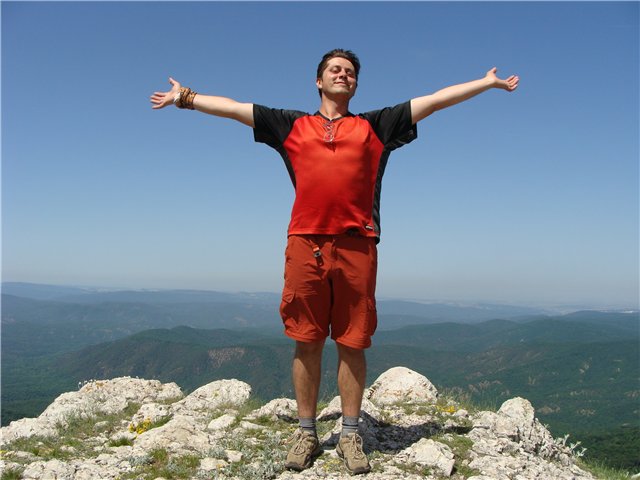 The main question: and whether I shall go again to a hike? After rise on Dzhur-Джур I have told, that difficulties will suffice from me, it was heavy, especially in a heat, and now I can tell, that - yes, I shall go, can, not in such complex(difficult) or not with that level of physical training, but I shall go. Andrey has placed us not only on saccharin, but also on mountains. After a hike we had even a week quiet matrasnogo rest in Laspi at the sea … and guess: we have again gone(send again) to mountains … 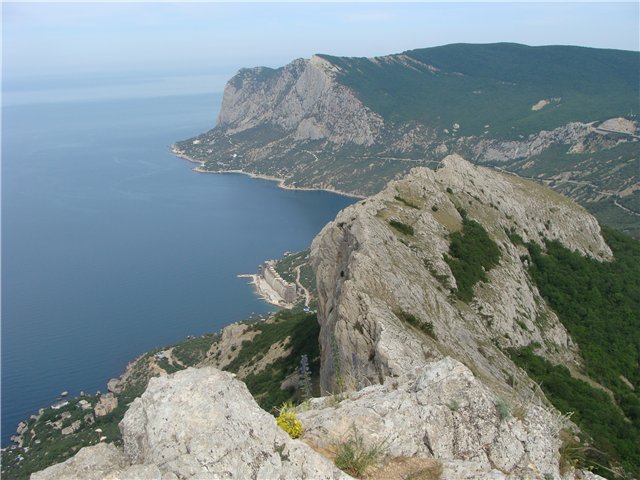