History of one (very short) hike 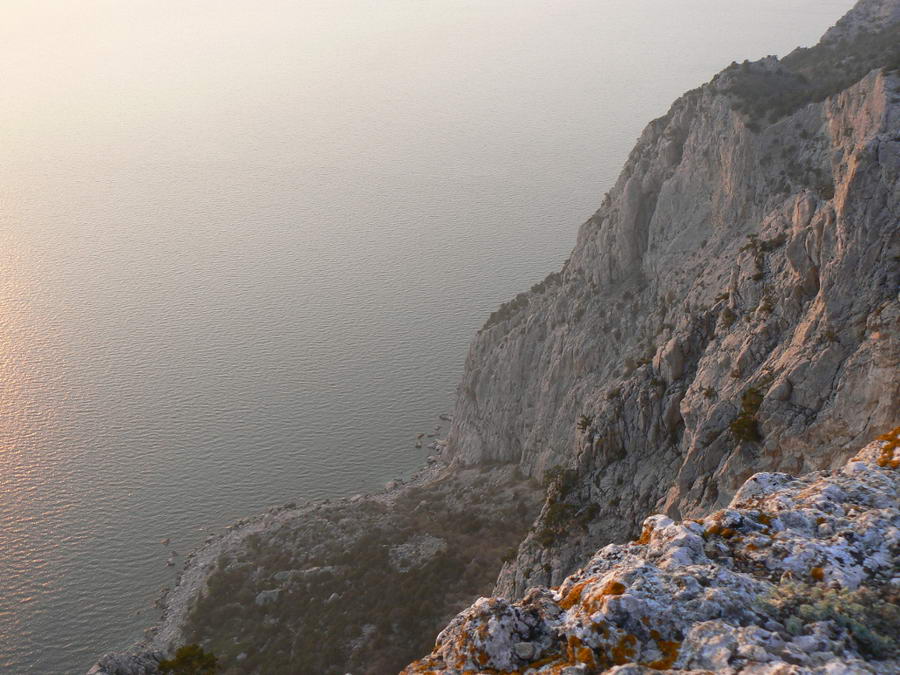 I shall note at once, this hike(trekking tour) for those who the most tasty eats all over again. I, unfortunately, not from such, therefore sitting in a train on a return way, have felt easy(light) kognitivnyj a discord. No, the hike(trekking tour) has liked me, however has been presented as a French wine in plastic bottle :) Having met the tourist group near a survey platform near bay Laspi (we began a hike(trekking tour) with the end) and, having had a look one eye on magnificent cape Sarych (the most southern point of Ukraine), we pobreli on proselochnoj to a track to our formidable barrier. Those in the first day there was a height the Large sum-¬бn with which, from height about 500 m above sea level, it is possible to see the same bay and the same cape. A difference - 2 hours of long rise after which the backpack sticks to the become wet back and if it(him) to dump(reset), apparently, that you it has appeared in weightlessness. Still the difference - scale of the review which is inaccessible lazy having a rest, preferring to use buses and cars.

Having admired a kind of the most southern coast JUBK, short walk on plain to mountain Kokija-Kaja on which during Soviet time the military base was placed was coming us. Looking at surroundings around of this base you understand, why in those days militarians were an exclusive class. In fact far not than 400 m under which behind a small edge of coast the infinite sea begins could sit all in any day above a precipice in height more. To admire tuchkami which often swim away in these edges(territories), or a decline which gold path tempts any owner of the camera to test a matrix of the device for survivability.

Coming back to my grumbling in the beginning, I shall explain, that I could estimate(appreciate) beauty of all of it(this) only then, having unloaded photos on the big screen of a computer. In the first put a hike(trekking tour) I has been dumbfounded by landscapes, expectations had not time to arise at heart and to serve as fuel for impressions. Though, I assure you, actually all looks(appears) much more beautifully, than on pictures.

Has surprised me and that later only 3,5-4 hours after the beginning of a hike(trekking tour) the instructor has told something like: « Here we shall stop for the night, it is time to go to search for a spring ». And I that expected complexities, have been adjusted(have been set up) on a late halt, installation palatok under light of small lamps and search of brushwood in kromeshnoj to darkness. I shall notice, that not only I expected greater(big) complexities: in the evening of the second day the part of our group has settled down near a fire and with ecstasy listened to marching stories of our instructor Tarasa. Whether it is necessary to speak, that to the person who has subdued height in 6,8 km, was than us to surprise, having reduced interest to an event around.

Already on the first spending the night I had to drink for the first time water from a pool (not including Kiev water), is more exact from the streamlet of thawed snow slowly current along last year's foliage. However, after kipjachenija it(she) has turned to the most tasty in my life a buckwheat cereal and not less tasty tea seasoned by dust from trees and leaves. On it(this) new in a life and a life of the tourist for me has ended and up to the end of a hike(trekking tour) nothing has served destruction of my stereotypes and a way of life. Sincerely I envy tourists (mainly to girls) which in such hikes(trekking tours) open for itself the new world.

As a rule, thinking to go to a hike(trekking tour), the tourist pursues one of three purposes (or all three at once): - to receive useful physical activity after офисно-planktonic work; - to look at beauty of the protogenic nature and sights meeting on a way; - to get acquainted with new people, to hear/tell interesting histories at a fire and, probably, to find to itself of satellites for the future hikes(trekking tours).

The third purpose, unfortunately, has been opened only partially. Cyril has correctly written, that bad people do not go to hikes(trekking tours). But to get acquainted and become friends with collective, at us was so not enough time (only 2 evenings at a fire) what really normally to communicate to the majority it was possible only in a dining room of Sevastopol before departure Kiev. Besides 7 from 10 participants of group well knew each other, that essentially reduced potential of an evening sit-round gathering.

In the middle of spring Crimea - a fertile place for tired of long winter and ofigevshego from the court yard which have revealed after a snow of the townspeople. Here already trees with might and main blossom, field flowers give unsurpassed aroma (something between mint and barbarisovym), and the grass with neprivychki hurts the eyes overdose of a chlorophyll.

Besides here, on southern I protect still practically is not present having a rest, which transform all Fig - from Balaklavy up to cape Ajja - into parking primitive people in the summer where to not find neither fire wood, nor secluded nuzhnika :). Therefore kosuli and even wild wild boars carelessly plough open spaces of cape Ajja, and the majectic owl does not hesitate "ugukat" that is forces right after a decline.

At last, in the spring the hike(trekking tour) reminds walk on a cool lawn while in the summer the ruthless sun threatens to cut the unprepared tourist on the first abrupt and long rise, in parallel burning out all nature surrounding it(him).

But also lacks are available. First, the temperature of water in the sea in the spring kolebletsja from 8 up to 12 degrees on Celsius, that, however, has not prevented to half of guys of our group (including and me) with cries to open kupatelnyj a season. Secondly, me, not having a modern sleeping bag with the code name «-5» or «-20», before a dream it was necessary to pull on itself all contents of a backpack (except for poncho), packed on all canons outdoorukraine.com.

Toward the end conductor Taras, probably, tired of our moaning about intolerable ease of life of a hike(trekking tour), has decided to make to us a surprise. After descent(release) from last point of a review of our hike(trekking tour) - flanks of death - with potjazhelevshim from several tens mbyte of illustrations the camera, I have asked it(him): « On what of footpaths we shall go? ».

Variants was three: - to round to a flank of death from northern party(side) on the road blazed by cars; - to pass(take place) on a footpath above the "gentle slope" which is going down straight to the sea (meters so through 250-300 on height); - to pass(take place) naprolom through mountain. Last variant was not considered(examined) at all, Taras to me with a smile on the person(face) has told: « And what you would choose? - then has added: - « we Shall go on this footpath (second): it(she) little bit loose, but picturesque ».

Unfortunately not skilled tourists, the footpath has appeared not through, and somewhere akkurat under bochkoj death it was offered to us to play game under the name « to itself Susanin ». A way it was possible to lay or along junipers, using them as the insurance, or on tops of greater(big) blocks where is not present foul fine kamushkov and coupling with a surface reliable.

After my friend from Sevastopol told, what exactly on this footpath is broken and will be crippled most of all the tourists walking between Balaklavoj and cape Ajja. In such cases you understand, that at all ease of Crimean mountains, here it is necessary to be extremely accurate. In fact to be broken on the first footpath for 20 minutes of walking from Balaklavy it would be ridiculous, whether not so?

otdyshavshis after overcoming a footpath, I have asked at Tarasa: « Why we have not turned back when it became clear, what the distinct(clear) footpath is not present further? ». « Because it undermines morals of group », - it(he) has answered me. And I for some reason at all have not begun to doubt in correctness of this statement. Last time having looked at the sea, mountains and the passed(taken place) way, we have unwillingly gone(send unwillingly) to a civilization, hoping to repeat similar swindle somewhat quicker and again to return to the Nature.

P.S.: As a result of a hike(trekking tour) we have studied(investigated) one more phrase from a lexicon of conductors: « flat descent(release) ». It something like « here nearby, 300 m » in one of previous zametok.

P.P.S: If be afraid, as well as I to receive kognitivnyj a discord owing to dissatisfaction razdutyh expectations, I recommend to pay attention to a hike(trekking tour) « Romantik Kollekshn » on which I now kick. All the same three days (read two day) are unable to open all pleasures of a camp life.