Happiness Of The Himalayas 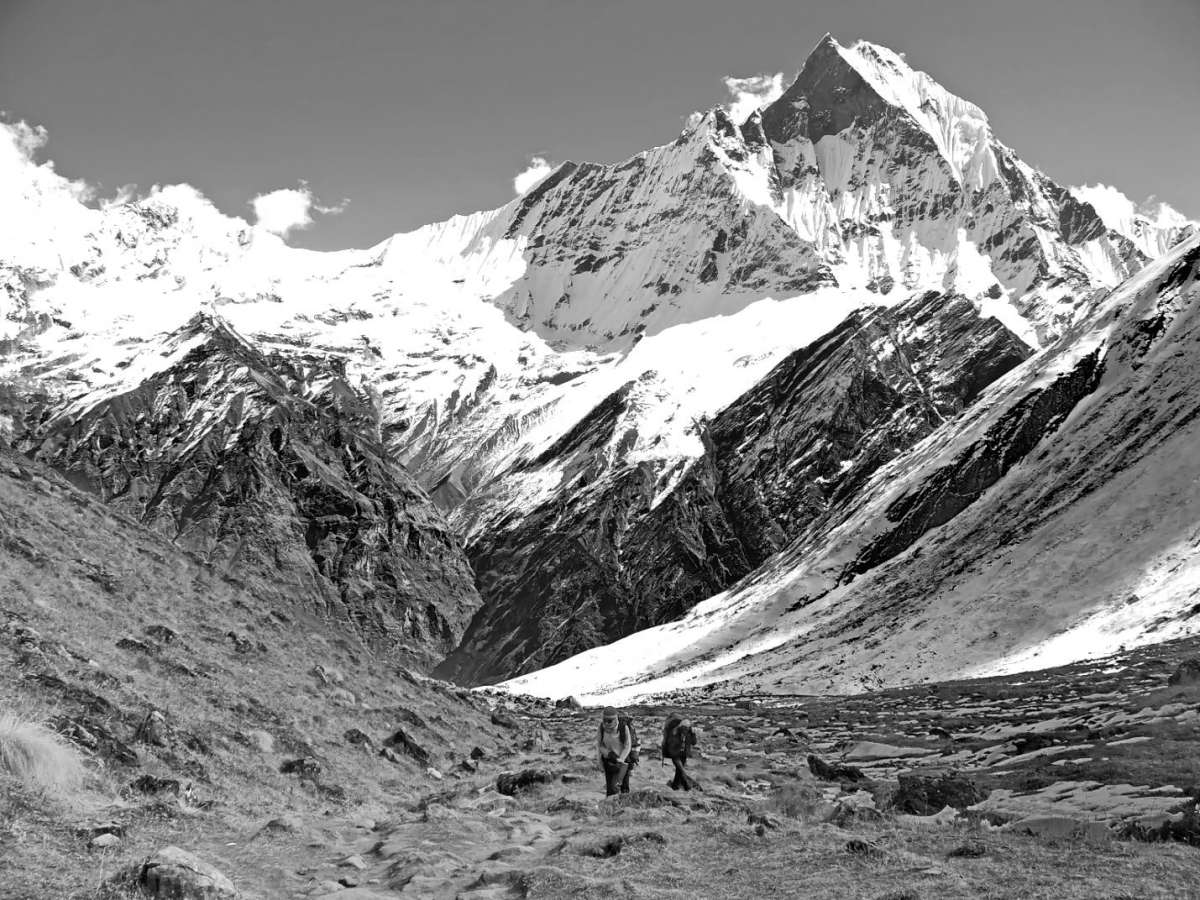 I sincerely wish those who at least once visited the mountains, to be in the Himalayas! Friends, you will not regret it! Once there in the campaign, you'll remember my words! It's the country that turns over in our heads a lot and everyone probably their: another start to look at life, overestimate it, and even more love for the abundance, beauty and originality! And today the Himalayas again beckon me, I want again sometime in the near or distant future to be in this WONDERFUL WORLD!

First of all the report I would like to start with as it has become my dream is a trip to Nepal Hiking. Only once, accidentally, quite by chance, being the first time in the Crimean campaign, it became clear to me that this is the type of holiday, from which I derive great pleasure....And that's among my five hike across Crimea, I met an amazing girl Terai. And after we started Hiking friends, occasionally met among one such meeting, and she had just returned from Nepal, I listened to her amazing, albeit short, story of the Himalayas, about what she saw. And it sounded so beautiful, exciting, and what her opinion was, when she recalled this trip Nepal (still this view stands in front of my eyes)that I really wanted to see pictures, and then read the report, written from her mouth. And then I told myself: I will fly to the Himalayas, I do not know until when, maybe it will be soon, maybe in 10 years, but be sure to realize his dream, even his family as it is stated!!!!

And it's only been two years, as all the circumstances of life in favor of the fact that I still had to see this AMAZING WORLD and nature ( I will not again be repeated, but it was AMAZING!!!!!) Andeven at the beginning of summer 2013, said to his family: I will fly in the autumn in the Himalayas!!!! (and to be honest, itself in this highly doubted). And it all came together so that at the end of August I bought plane tickets Moscow-Nepal-Moscow on the website airarabia.com. And November 9 in the morning was dorobiala backpack, wore it on his shoulders, and still not realizing that he is leaving to pursue his dream, not hasty, happy walk to the station was moved on the train Ryazan-Moscow. In Moscow dropped in to visit his aunt, and from her house meter, Aeroexpress drove to the airport. Slowly passed the check, walked around the airport and closer to the landing met with one of the companion hike - Seryozha, who came from St. Petersburg.....And then I thought, it's great that I get to Kathmandu is not one, and the upcoming night at the Emirates full of unfamiliar (flight to Kathmandu via Emirates and overnight at the airport).. So we arrived in the Emirates, and here are my impressions all grew and grew.... 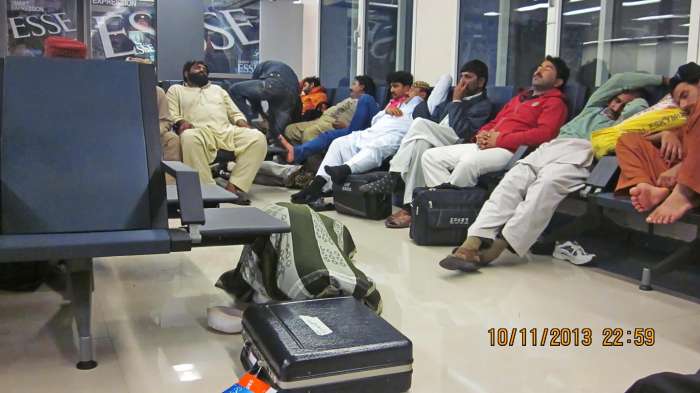 The airport is filled with Emiratis, Nepalese and many other Nations and among all this crowd we saw our another fellow traveler-Katya. And after we tried to look to find two fellow travelers from Ukraine, which also had the next morning to fly with Emirates Nepal. But our attempts were unsuccessful. Time for 11 nights, terribly sleepy after a train, flight and among all events don't understand how you can sleep on the floor (so slept many Emiratis in their white robes). And then we suddenly got addicted young people of Russian nationality. As it turned out he knew where we fly, and we wound up in conversation with him, then he turned his adjacent backpack, where he was the icon of the company through which we lately!!! Cool, my!!! So we decided to start a conversation, met was that he was flying with route "Everest" by Cyril and was delighted with what he saw. And we all just had!!!Here he is to us and suggested she sleep seasoned travelers. And early in the morning from the airport Charedi (city, UAE) we proceeded to the registration of the aircraft Charge-Kathmandu!!!

The plane was nothing left to do, how to sleep soundly while now, and wanted. And then I woke up before that time, as we began to fly Kathmandu. I stared out the window of the plane and saw the Himalayas. And then, suddenly, I was filled with tears, I sat in the seat of an airplane, looking out the window at the view of the Himalayas and cried, I smiled and ran her tears. It's amazing. Now I ask myself: is it possible to cry from the beauty of nature? I will say: Yes, you can. And then I cried from what I saw the beauty, the beauty in life (not on TV or in photos on the Internet), which has blocked all my emotions. I could not control my tears could not stop them, they were tears of happiness with a smile on your face and joy in my heart.

At the airport of Nepal we quickly found our Ukrainian companions (Marina and Max), then we have a very long questionnaires and were the last in the queue for a visa in Nepal (although Cyril all did a mailing to act quickly at the airport). Mdaaa, standing last in the queue, laughed, tried to outwit his Russian Holovko of inostroza, just to get out ahead of the queue (BUT did not work, they have another way of thinking), and so after more than a hour check-in, we hired a taxi and cheery already went through Kathmandu to the hotel, where we waited for the rest of the group and the instructor Sasha!

And early in the morning we rushed to the city bus to go to Pokhara. The bus was filled with Nepalese. When we went in the bus, sometimes I wanted to sleep, but the species that has opened the window to capture vsek emotions. Of course, someone is sleeping, someone tried to sleep, but we all moved to the very purpose for which we came here. Oh, the sudden breakdown of the bus, the wheel broke. Yah, they are routine, pump to spool the wheel, replace the wheel. Of course, in order to experience all the delights of our adventures, our wheel need to change... change the wheel took at least an hour, is it a lot???? I think not. Most importantly we arrived in Pokhara. From there slowly pushed to the Phewa lake, which is the island. Krasotica, on the background of the lake the mountains of the Himalayas, the snow-capped mountains, are proud of and admire... 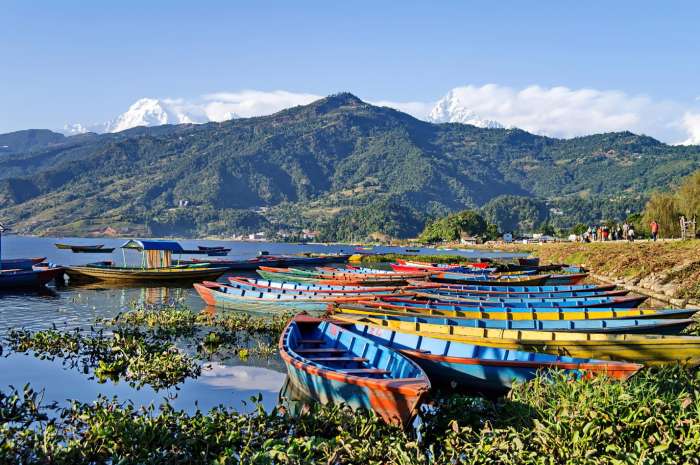 And after an overnight stay in the city of Pokhara early in the morning we filled with backpacks rushed by taxi to the mountains, there where there are no roads, cars, and were only trails and endless stage. I almost forgot to say, but at night in Pokhara I cupial three pounds of sweet Himalayan mandarino who ate the next two days ...hardly in Russia you can find such sweet tangerines. So I'm on arrival in their city, specially decided for comparison at a local shop to take such tangerines-are not the same, not at all sour...

And so our trip began...We prodigene Nepalese village, where there are buses, motorcycles are a tourist stalls, children on the edge of the curb warming themselves by the fire and watch the passing tourists. As we go farther...pass hinged wooden bridges and enter the world of BEAUTY! We have huge mountains, among which flows the turbulent river and somewhere far away on the mountains are villages where people live, grown in the mountains of various grits! It's amazing, but on the mountains they work the land in order to grow and get cereal! What a contrast in the world! In Russia many lands, sooo many lands that are empty, overgrown forests and we are not enjoying the fruits of nature! And these amazing people ( I have other words not selected), some of the images in the mountains cut off the ground, making them stepped fields and cultivated cereals! A hike did not cease to be surprised. 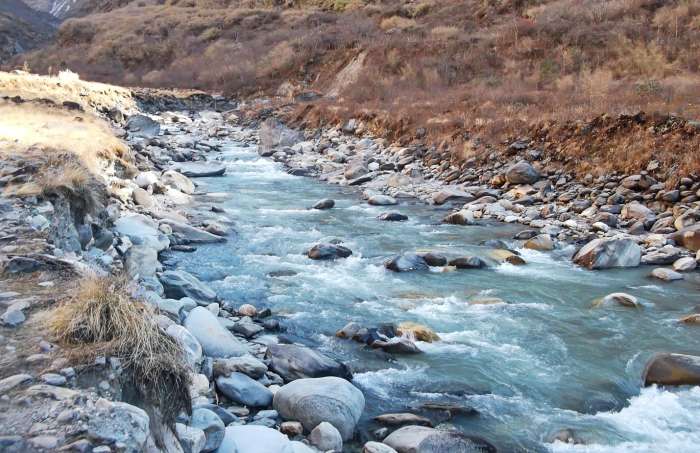 And here they tangerine groves, around the banana trees, as if in a fairy tale. 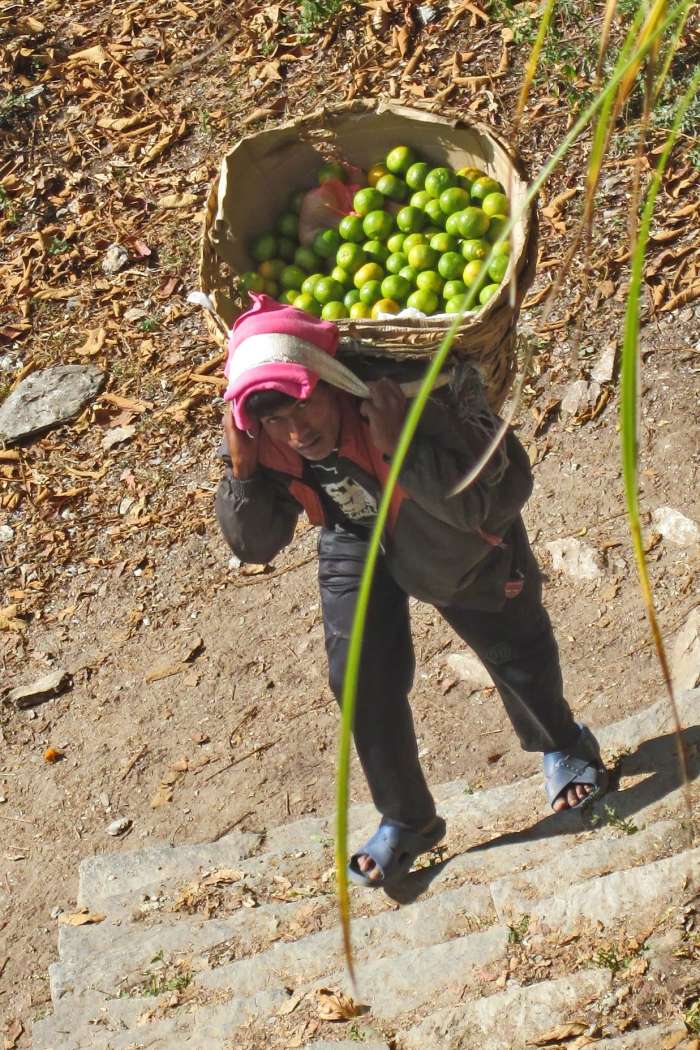 And like in a fairy tale or a movie suddenly begin to appear caravans of donkeys who carry bags of cereals, food, gas cylinders. Later in the trip we will see many of these caravans that every of us will overtake and delight our eyes with its beauty and attire.. 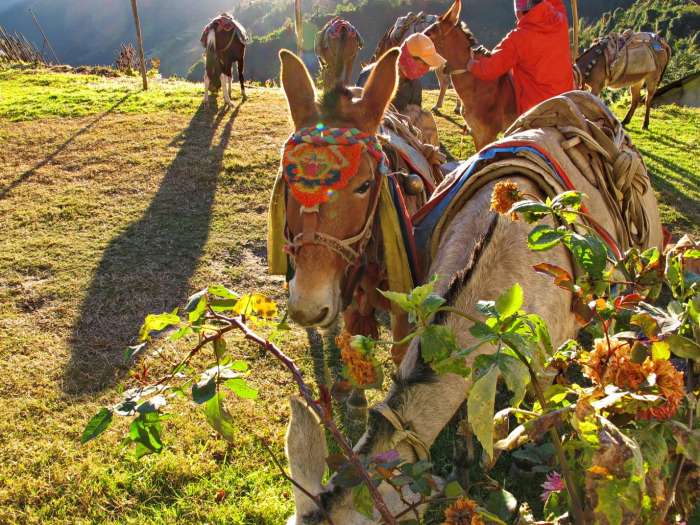 And again log crossings, towards the go or overtake porters with huge backpacks on their shoulders 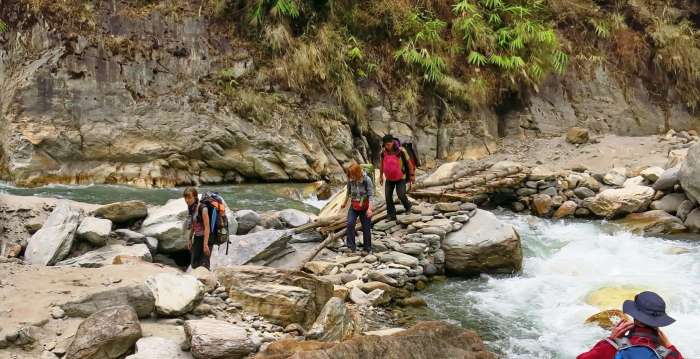 Oh, and here Obezyanka.....gave her his Mandarin duck, which she ate with enormous pleasure 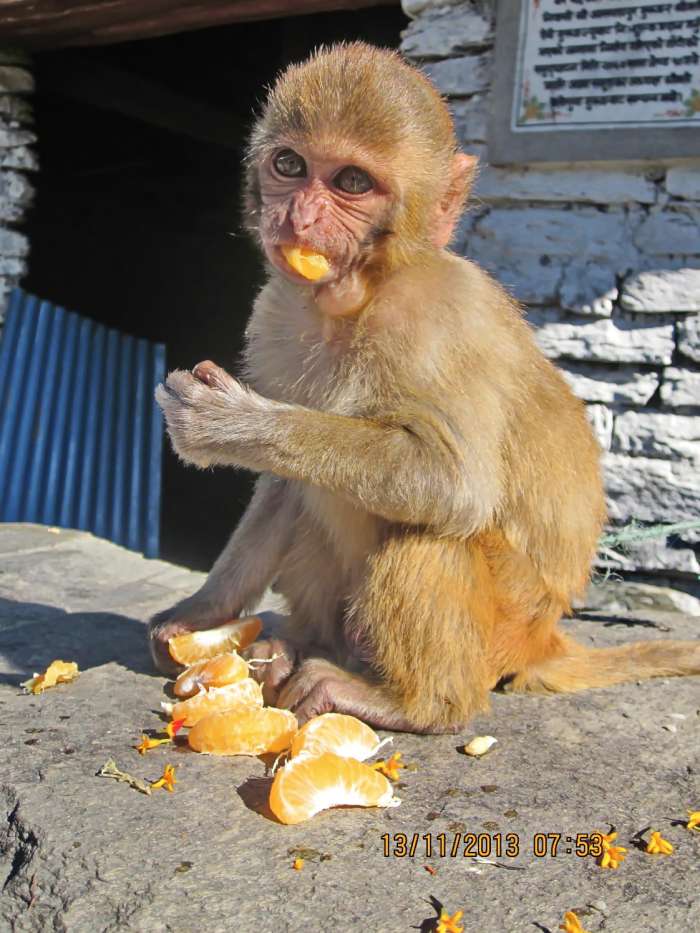 And around situasie pink trees...Bitlis vicnity what it is, someone suggested that it blossoms peach, someone said that it's Sakura... On the background solenoi nature these huge trees look gorgeous. And sometimes I go and I understand that you are so much tired (you backpack, step-step, many or even infinite speed up) 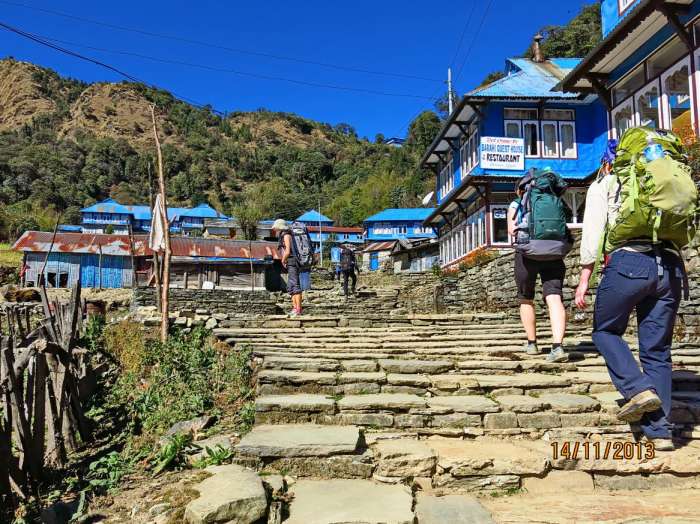 and you terribly want to relax, sit on a rock, leaning back on the backpack, and you're looking so that sometimes even from such beauty rolled her tears on the eye, and the face shows a smile in his eyes, like the eyes to absorb and assimilate this indescribable beauty: how, where, on the opposite mountain, sooooo vysoké grief from some little gorges beats water, which turns on the mountain to the waterfall. And this waterfall spreads all over the mountain and all of this is at such a height that's just not paresthesia be surprised at masshtaba proishodachego. And suddenly the water hits about any stone in the mountain, and from him come flowing streams of water that fall is already down, whether in the valley or on a mountain...And all of this falls the sun is shining bright.....Sorry this couldn't send no photo, even the best camera and the photographer!!! But this beauty stands before my eyes, and that was very memorable for me and my fellow travellers too!!! 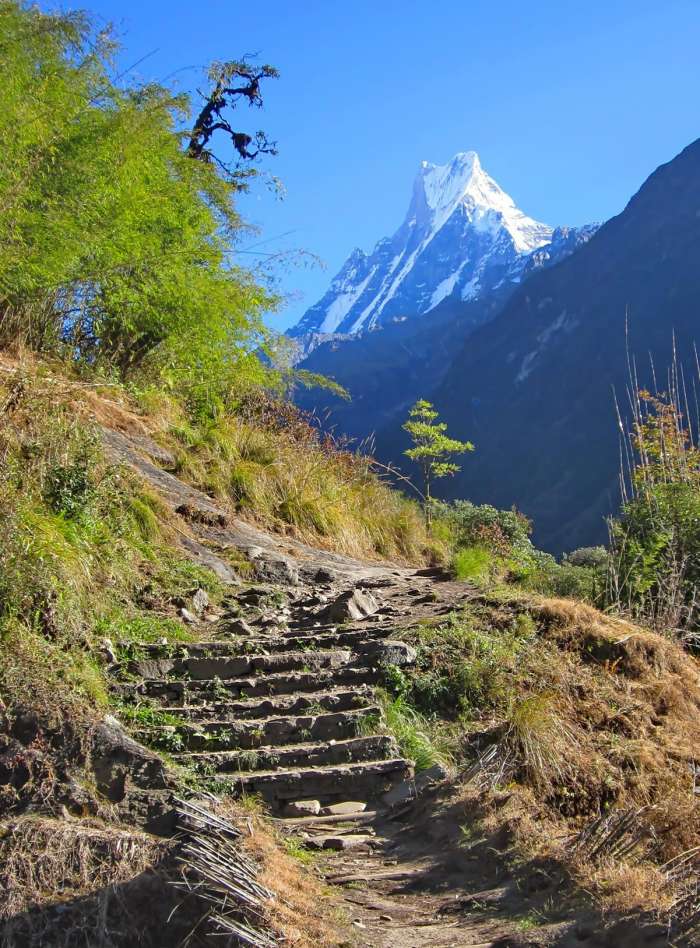 And so our trip filled with emotions every day, every day progressed in such a leisurely pace.... About the campaign can tell you a lot, lot, lot of emotions......but it is always better to go and to feel and to understand what is happening in a tourist at heart who has been there!

Here I sit and write the report, and before his eyes the picture of the time spent in the Himalayas: sitting somewhere on the edge of the mountain, holding a hot Cup of tea, but it's such a jet twisted pairs, slow SIPS drink tea, and on the face a nice smile is happiness, and look at these great Himalayan mountains, and understand that the moment of being in the Himalayas is a great happiness!