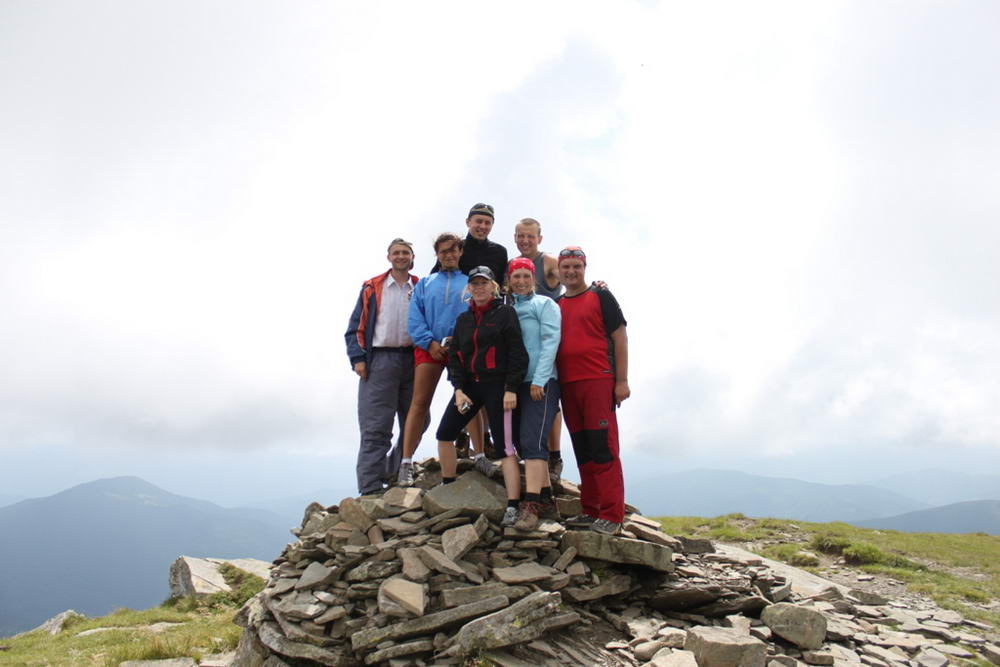 Report hike on Montenegrin Ridge (route "Highest peak) Do you happen to have been in the Carpathian Mountains in the middle of August 2010? No, do not hit! Well, you lost a lot!

"Good luck, that's lucky, how did you podfartilo" - these and other similar meaning words I heard probably 60 times during the five-day trip (from 8 to 13 August). To express its joy at our good fortune hurry almost all encountered our guides, foresters and local residents only. I not only disagree with each of them, but I can safely say that was lucky, at least to me much more than they expect. But let us all about it ...

The main reason for which I have at the end of our little journey has already begun to believe in their own sverhvezuchest was incredibly luxurious, both for the Carpathians, the weather. Six days of sun and only one rain and one night, this on the Montenegrin Range (Carpathian region) is not remembered for a long time. "So long" window "is rare for this region of Carpathians. Safe haven.

The fact that the Montenegrin mountain range is the highest and, accordingly, it retained almost all the rain clouds "- explains the specifics of the local climate and our guide and instructor Alexander Kushnaryov. At the height of the route (most of the time passes above 1600 meters) has provided a much coveted cool - the day the temperature was around 20-25 degrees at night fell to 10-15. Perhaps it is worth recalling that in Kiev at the time the thermometer at night did not drop below 30 degrees, so other than a safe haven Carpathian mountains and not be called. Such an ideal weather conditions allowed us to spend five days with the maximum benefit and get the ultimate dose of positive emotions. Few weather permits go to all six Ukrainian mountains above 2000 meters and not just go to them but also enjoy the views from these kinds of fabulously beautiful landscapes.

Six times in 2000. The first route was dvuhtysyachnikom mountain Petros (2020 meters). With this majestic peak overlooking the whole of Montenegro Ridge - from Hoverla to Pop Ivan. The strong impression dented and twisted around its own axis cross mounted on top. When you see the ease with which the forces of nature (lightning) ruined the three-meter iron cross, began as something different to evaluate its invulnerability (or rather more as a vulnerability).

(Mosimage cw = 500) Another feature of Petros can be called down from this mountain. If the ascent is not especially memorable, the toe on the other side (towards Goverla) leaves a lot of impressions (not always pleasant). The descent is steep and if the track is wet, you can pass on the fifth point than a dozen meters, in the presence of sharp stones makes this method of movement is very unsafe. By the way the instructor told us that a winter ascent on this side of Petros, is the only Categorical climbing routes in the Carpathians.

The next day was scheduled to climb to the top of your favorite ex-president of Ukraine - Goverla (Viktor Yushchenko visited it 35 times). Lifting it is not difficult, although it is possible that such an impression is created due to the massive climbing on her pensioners (mostly from the developed capitalist countries).

A much stronger impression entourage and the situation at the top. Most of the highest point of Ukraine (2061) reminds ... lunapark. Crowds of people were drinking beer, champagne and drinks stronger. Screaming students and smiling aliens. The unimaginable number of flags, flags and scraps of fabric just party placed anywhere where they can only hold, creates a sense of fair vulgar. What is missing is Gypsy, and Ferris wheel.

(Mosimage cw = 500) In the summer Hoverla daily visited by 400 people (weekends and holidays up to 2 thousand), so nothing surprising in the fact that the highest point in Ukraine resembles an amusement park there. The only thing that really upsets - this swinish attitude of people towards nature. The entire summit was littered with a neat layer of garbage - bottles, paper, cans, cigarette butts, condoms - this is not a full range of tools of human bestiality. I can not understand these people - If they could Pull the full bottle on up, then do they have no strength Carry let down?!

The next day we visited two more domestic dvuhtysyachnikah: Mount Ribs (2001 m) and Gutin Tomnatik (2016 m). These tops are a little bit away from the main routes, and most tourists do not visit them, but in vain - species offered to them are worth to them to climb.

(Mosimage cw = 500) However, the bulk of experience in this day brought no dvuhtysyachniki, and relatively high mountain Spitz (1864 m), more precisely a rock in her and around her. Do you remember the scene from the movie "Lord of the Rings", where characters are running through the caves of Moria (crossing of the abyss)? Now imagine similar semidesyatimetrovye stone columns holding the balance in defiance of the laws of physics. This is the famous rock in the area of Spitz (the name of the Polish "Spitz" (translation - "spokes"). Seen the words to describe it is difficult, there have been.

It is worth noting magical beauty of the mountain lakes - Nesamovyte (located at an altitude of 1750 meters) and Brebeneskul (1801 meters - the most high-altitude lake in Ukraine). From the lake Nasamovitom many legends. Locals believe that this is the lake living souls of suicides and murderers, and if you disturb them throwing stones into the water, they will fly out and bring thunderstorms and hail for many miles around. Whatever "terry" superstition you now did not seem this legend, however, our guide to earnestly asked not to swim in the lake and did not throw at him. Those wishing to check on the veracity of the legend itself was not found.

(Mosimage cw = 500) Finally we left the mountain Brebeneskul (2035 m) and the most mysterious and unpredictable Carpathian top - Pop Ivan (2020m.) or as yet it is called Chornohora (hence the name of the ridge). Mountain with the worst weather, so also called Pop-Ivan. Our guide admitted that during all the years of walking the Carpathians, he was only three times in the trans-Ivan in clear weather. We were lucky, most of the group were in the Carpathian Mountains for the first time - and immediately got on Chornohora a lovely day.

In addition to the vagaries of weather and a dozen well-known legends gutsulsky Pop Ivan adds observatory on top of it (or rather what was left of it). In 1936, the Poles and avstorovengry jointly built a very high mountain observatory and a hotel. However, after the war was the Soviet authorities had decided not to restore the building considering that the scientific value of the observatory is negligible. Nevertheless, 65 years abandonment could not completely destroy this unique building.

(Mosimage cw = 500) It is difficult to write something about this place, the only thing that you know and feel certain - that's what's good and there must always come back. The biggest stroke of luck.

Weather is of course very important, but it is my luck has not ended. Not less lucky than good weather, but rather a great success and much was to people. Separately want to note a guide-instructor of Alexander. When a man, a kind of thing makes a sincere interest and given him entirely - this can not bring excellent results. This is just about Sasha, he knows and loves nature and all she gave it back. Therefore, in addition, that with it you feel confident in the mountains, he is also a very interesting conversationalist.

Sasha zoologist not only education but also by vocation and he knows a lot about the animal world. So sometimes talking with him I was reminded, reading Gerald Durrell - as interesting and informative. And of course many thanks marching comrades - with you was easy and pleasant to walk on high Carpathian mountains. Excellent holiday.