The Crimean Gobi, it is August Babugan

I wish to share the impressions about a recent hike « above the sea ». Though this our hike can be renamed safely in « run on deserted plateaus » as we more or less adhered to the planned route exactly two days. All rest - was the continuous improvisation caused by exhausting heat and sharp shortage of water (many sources have simply dried up). Also the pressure(voltage) with meal was felt also, is more true with its(her) insufficient quantity(amount) (sent messengers behind bread). But I have left to take a walk with a backpack across Crimea not first time and perfectly I understand, that a life, weather, people (that is Circumstances) always correct(adjust) earlier the made plans. The impression of this "output(exit)" remains ambiguous: on the one hand, I about-about-very(-very much) am happy(am), that at last have visited on Babugane and in Besedke Winds (was with friends in April of this year in Crimea and we planned to pass(take place) in these places, but, already having scrambled on Nikitskuju jajlu, have changed a route!!) . On the other hand, there was an easy(a light) discontent with that we have reached bay Laspi, - there was no time. The best and positive emotions on this travel at me are connected with process of dialogue, with that psychological climate which has developed in group, - was rather cheerful, anybody "did not strain" anybody, there were no quarrels and misunderstanding. « Technical equipment » has admired: except for obligatory cards(maps), a compass and boilers, - an axe, a tape saw …

The first day of a hike was marked absolutely by minor alterations in a route: have started from a settlement Grape for Alushtoj, instead of from the Small Beacon as it was planned. The mountain Paragilmen, thus, has remained in a unattainable distance, visible in easy(light) a smoke. Have beheld towards evening « absolutely beside » the Bird's rock - the Large sum-¬án (1339м) which have decided to subdue next day. How much(As far as) I remember, in Crimea any mountain or a rock though something similar to a beak, the wing or the whole bird, "Large sum-¬án" (well-known the Falcon at southeast coast, - including) is called. Spending the night have arranged on a slope of mountain in a beechen wood. The source near which we became, appear, follows directly from under a huge old beech.

For morning of the second day send(have left) to ours to " the Bird's rock », having climbed up on which have felt sweet feeling of flight above plain, - kind Alushty and vicinities in golden a smoke, a hot wind to face …

Further our way was "thorny" - on burnt the sun of a plateau with rare thrickets of a thistle, a sonchus and any else unknown to me of "prickles". ZHidenkaja young growth stirred up(tortured) by a wind sosenok, the ground which has cracked a heat, a red dry grass, - to such us predstalo the highest place of Taurida - plateau Babugan. All the day long we tramble down its(his) dust that to early evening to leave to bottom of " top of Crimea » - mountains Roman Koshs (1545.) - has not impressed: close it seems an inexpressive hill among several same hills, - lifeless red bugorok on the same lifeless plateau. And only, having ascended to the very top of this mountain, suddenly you feel a sharp cold wind and you see before yourself a fine panorama of mountain Crimea with especially allocated on the general(common) background of "hills" rocky a Ý¬½¿º¿-breaker, one of tops of plateau chatyr-ñáú. Here we have seen a miracle: above us sijalo the sun, and below, in a valley, there was a rain - it was visible, as from clouds the whole streams of water spill.

Up to Besedki Winds this day we and do not send in addition(have reached) (whether a heat, whether has stopped absence of water), - the source in which we expected to resupply, has almost dried up: water did not flow, and dripped. Has been decided to collect all the night long water and only then to be put forward to besedke.

Morning 3-it day same hot, as well as previous. The idea has flown: to go at night. (I do not know, who the first has stated it(her), but who "submitted", I guess: the two first nights on our camp "nabredali" the tourists who are walking about with small lamps in outer darkness). But in the morning it still there was inexpressive and uncertain "idea" (it is far not the plan!) . Therefore, not receding from a route, we have vigorously gone(send vigorously) to Gurzufskoj jajle, have visited(attended) Besedku Winds, have admired kinds of Gurzuf and gorge of Fairy tales; have passed(have taken place) further - to Yalta and unusual beauty to the natural boundaries which are going down downwards. Long sat, experiencing visible beauty. And here has finally ripened the plan of night transition: the majority of voices have solved, that on of the Ai Petri nothing, "is too cultivated", in Karadagskom to a wood there is no water, to the Devil's ladder too, naturally, shall not go (farewell, Foros, Bajdarskie a gate and bay Laspi). I have stated the weak protest against « to go in night » (at me memoirs on a hike to the Grand Canyon of Crimea which we have carried out with friends in August, 2006 still(even) have not disappeared: have left on 19-th of August, in day when has jerked Novobogdanovku and were late in a way more, than for day. To not change a route, went in the afternoon and grasped a part of night). - And now, at words « night transition », I somehow by itself zanyli brought down in the past to year kolenki, had easy(light) attributes "depressnjaka" in the form of mutter and the general(common) discontent … But this mood has quickly passed(has quickly taken place) and was replaced by joyful excitation - expectation of an adventure! (all is good, that the life seldom goes to the plan). 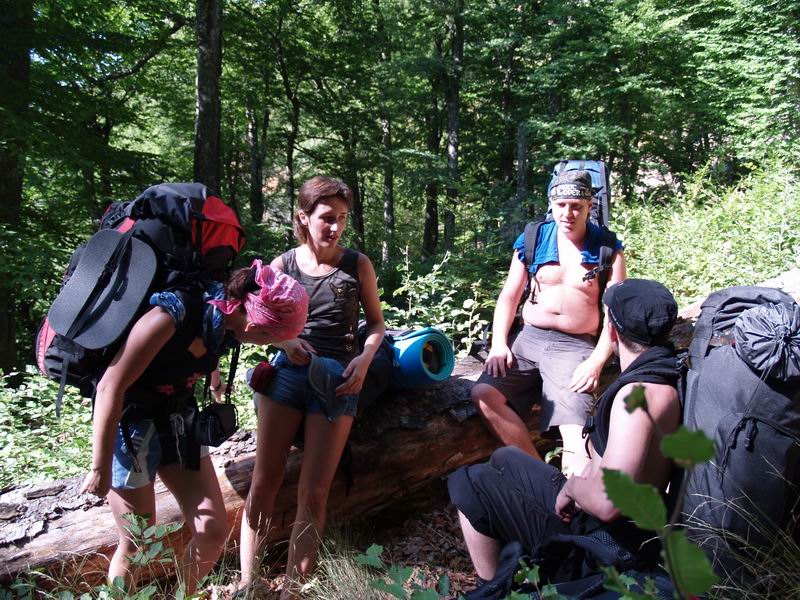 On a lodging for the night have stopped in any "hollow", sprjatannoj in an old beechen wood; above, too in a wood, have found out the rests of any stone constructions (Vladimir, the conductor, has told, that is old, etak 100-years prescription, shelters for sheeps and places of spending the night of shepherds). At a source proceeding nearby of our parking, some "troughs", the third from a source - exclusive - hollowed of an integral tree trunk, the others - modern "zhelezjaki" are put in a number(line), ledges downwards. Probably in this place and or those sheeps or goats, "koshary" which we saw above. Evening passes(takes place) in discussion "night" and in jokes in this occasion.

The fourth day is not moved anywhere: messengers send away(have left) behind provisions in village. We or eat much, or have a little reserved meal. Dinners-перекусы, frankly speaking, very poor (on a slice hlebushka with paste, on pair slices of sausage and tea). - Towards evening muscles turn in "studen" and legs(foots) refuse to go. While we "zaslantsy" ransack in searches the breads which have remained in camp thoroughly survey vicinities. The most interesting object are same thrown "shelters": we find out, that constantly someone uses them, podzhivaet or podnochevyvaet: fresh solomka in "bedroom", a cloth in the "drawing room", the forgotten trousers … Near to our "hollow" we still more some similar deepenings with beautiful heaps of stones and paporotnikovoj young growth.

Our "messengers" have returned with bread (only in the second village under the account(invoice) and have bought(purchased)), it is possible to not save meal now. About eight evenings we leave in a way - night transition on Ah-»ÑÔÓ¿¡ß¬«® jajle. We rise upwards from rendered habitable "boiler" - from a slope the divine picture of the Crimean nature painted by beams of the coming sun opens. (for the sake of such decline it is possible and « in night »!).

Before the output(exit) at night someone has told: « And it is a pity! Such wonderful place as to leave it would not be desirable! » Andrey who midday passed(took place) behind bread, has added: « Yes, and, the main thing, - shop beside! »

There has ascended the moon - became almost svetlo and road not such difficult as it seemed. Went very quickly. I do not know, how others, and me the monotonous picture - a little oppressed dark silhouettes of trees, "pomaranchevaja" the moon and white stones under legs(foots) on which we "learned(found out)" road. For the sake of « dispersion of a gloom » someone has started to tell jokes to not change already settled tradition: at night - bajki and jokes, and that we do not sit at a fire, and we stamp on road, - it is not important. The main thing - a correct spirit. The meeting with foresters which have strictly requested explanations and a card(map) of a route has a little unsettled. After short negotiations, we go further. Has managed. (in a view of the further events, - a fire in Alupkinskom a forest area, - their actions seem quite natural).

On "lodging for the night" it is(are) arranged a little not having reached up to the planned place - in a slope at-íáÞ (1196м) above Simeizom. Everyone keep within. I still more some "strazhdushchih" podgryzaem sandwiches and chocolate. But even the meal does not operate(work) pacifying - the dream has left. Everyone sleep, and I as somnabula, I burn down a fire, and then, having scrambled on the nearest rock, I meet a dawn. Is something! - when in the east in the dark sky there is all over again a soft strip of cold pink light, and then in a wood the voices of a bird start all to submit more loudly. And zrimo it is felt, how the gloom as the strip of pink light becomes all more brightly and more widely … gradually recedes

I sleep chasika two and I rise together with all somewhere to nine mornings. After a breakfast we transfer(carry) camp to I áÔ-speak in a deep voice. - the wonderful show opens from our new parking: porosshie a wood slopes, below far-is far the Cat and settlement Simeiz. More to the left - rocky top at-íáÞá (in translation(transfer) from Turkic language « the Head of a horse »). - it is not similar.

Having left "watchman" (Light) the radial output(exit) to cave Tatjanin a grotto is done(made). It has appeared, that it not and is close from sew parking. The karstic cave called Tatjaninym by a grotto, has surpassed all expectations: the most beautiful accumulate in the form of huge mushrooms and draperies, silent knock of drops … Back to I áÔ-speak in a deep voice we go other road, as describing the big circle. We come back on a decline; before camp we leave on the rocky breakages similar to an ancient stone laying: there ahead the sea merging with the sky, again - Simeiz and the picturesque rocks which are looking out of water 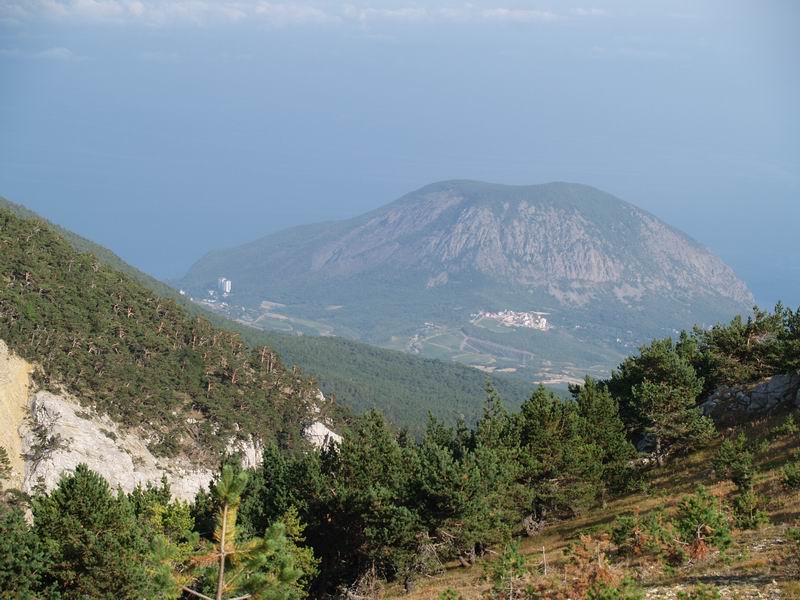 Before parking nabredaem on the big bush kizila with conditionally ripe berries (well, almost ripe), - we enclose it(him), how many it is possible to get. - in the evening from a mix of it(this) kizila, wild pears, mountain grasses and actually tea very quite good hot drink has turned out: something an average between compote and tea.

Last evening in mountains, taki « above the sea »! (We to it(him;them) have returned). - at-íáÞ in beams of a decline, pink trunks of pines, slow conversation, stars above a head, pleasure of alive dialogue, - everything for the sake of what it is necessary to get out in such hikes.

Morning of new day, last day - day of Independence of Ukraine and day of returning in a civilization. It is sad because of forthcoming parting with the found friends a little. We so well "refer(have converged)" (literally words), - I hope, together we descend(go) still not time and to native Crimea, and in farther mountains.

… Long descent(release) by slopes, transition in a the Cat and occurrence absolutely at all glamurnoj groups of people with backpacks on simeizskom a beach (but to us at once there was a place), - bathing, a sit-round gathering before farewell.

- Up to new meetings and new adventures!