This campaign though it was planned already for a long time, has occured absolutely casually. Gathering have borrowed only 2 days, and it at that that on a nose was New year and other cares too sufficed. Initially planned route: the Small Beacon - Paragilmen - Babugan - Yalta Yayl - Ai Petri. Really we went so... 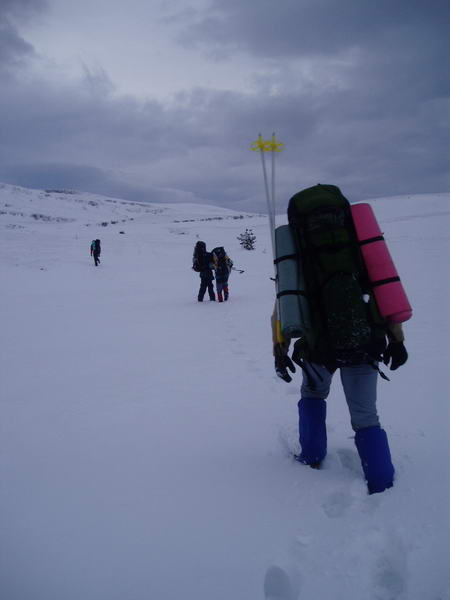 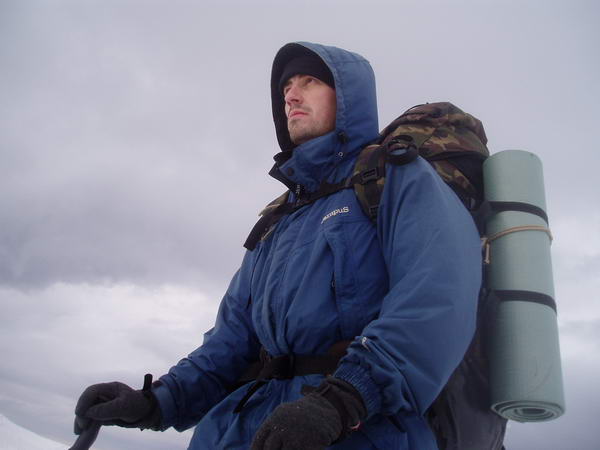 1 day of a campaign - on January, 2nd.
From Simferopol on bus up to the Small beacon. Rise upwards past Sharhinsky career. On a way to us there were tourists met New year on Yayl. They have slightly scared us a blizzard and a snow and have wished good luck. On a lodging for the night of steel at a spring the Talma. Temperature about zero. Since height of 600 meters the ground is covered by a superficial snow (5-10 centimeters). 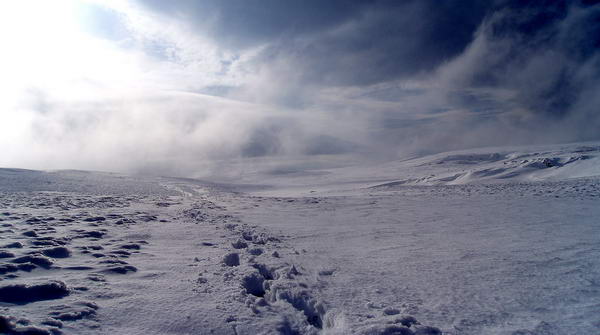 2 day of a campaign - on January, 3rd.
Rise in 6 mornings. In 8 after a breakfast we continue movement upwards on a first coat. At 10:23 we already on plateau Babugan. Together with us on a plateau there are clouds, that depriving with us panorama Alushta's. We go on road aside a gas main. Gradually clouds rise, and the snow becomes on the contrary deeper. As a matter of fact around the present{true} winter. Short of practically zero temperature. In vigorous rate we cross Babugan-yayl. After a dinner at 14:00 we make a radial ascention to Roman Kosh - the highest top of Crimea. A decline (16:30) we have time to reach up to Arbour of winds. Probably the name to her a distance knowing people for the wind there really was. And such that on a lodging for the night we have decided to hide under brought by a snow pines. All the evening long we had a good time melting snows for a supper and a breakfast. Have laid down to sleep nearby 9. 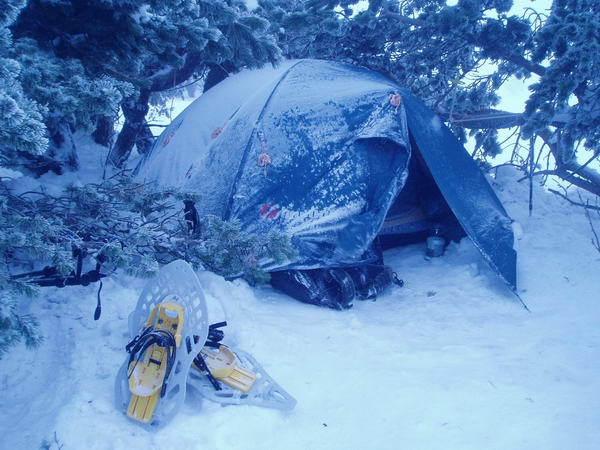 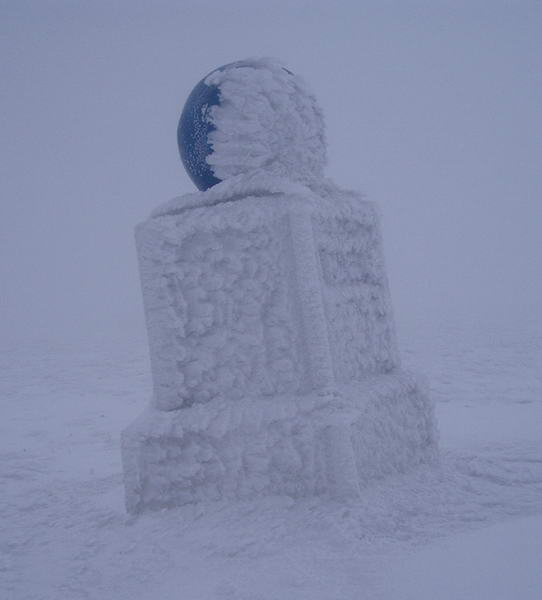 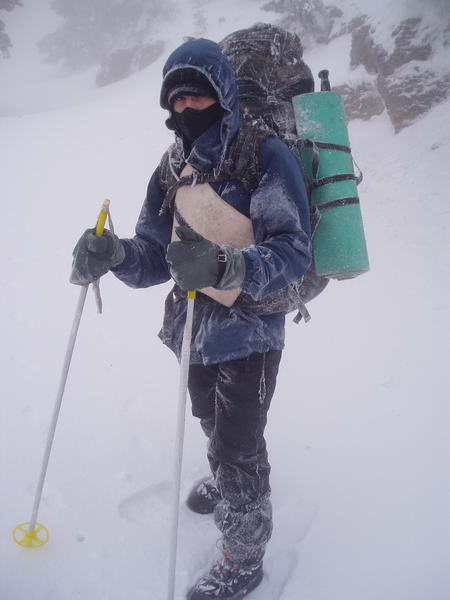 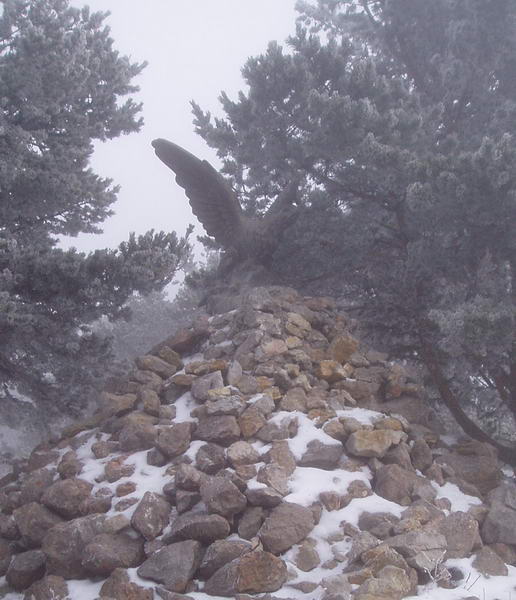 3 day of a campaign - on January, 4th.
For a night weather has finally deteriorated. The wind has amplified, clouds were condensed, the temperature has fallen. Tents were frosted over and inspire with big work. While we the true blizzard was going to, has begun. Visibility zero. In such conditions I have not risked to continue movement on a ridge and have decided to go down downwards on highway Romanovskomu. The highway the truth was constantly hidden from us under deep snow drifts and only lonely kilometer columns assured us of correctness of the chosen way. At 12:30 we have passed{have taken place} the pass Nikitsky noted by a sign in the form of the dark blue globe. Right after pass the road has disappeared in a unknown direction and I have spent following half an hour walk. Then the road, thanks God, has returned and did not disappear any more. We have passed a cordon the Red Stone and nearby 16:00 steel on a lodging for the night near gorge Uch-Kosh. 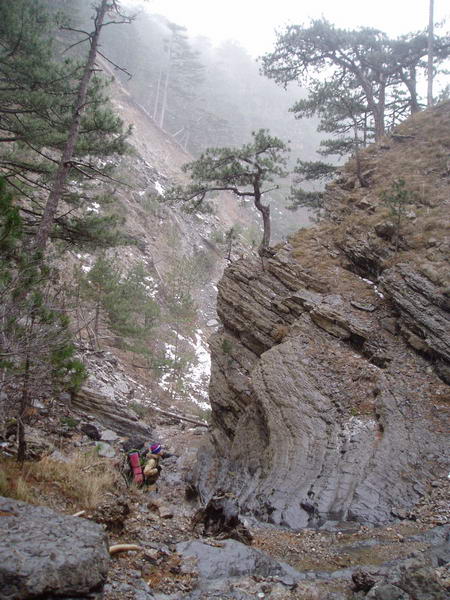 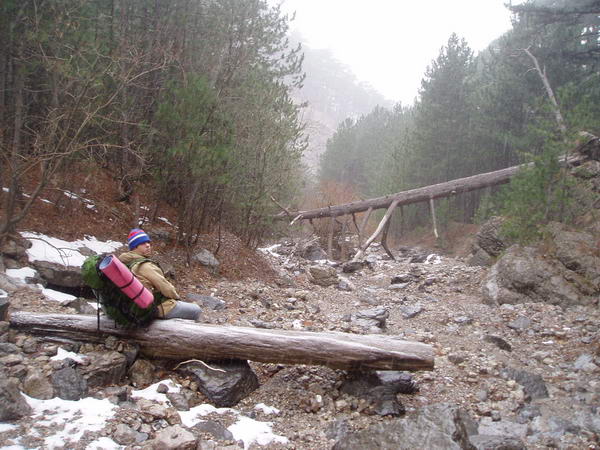 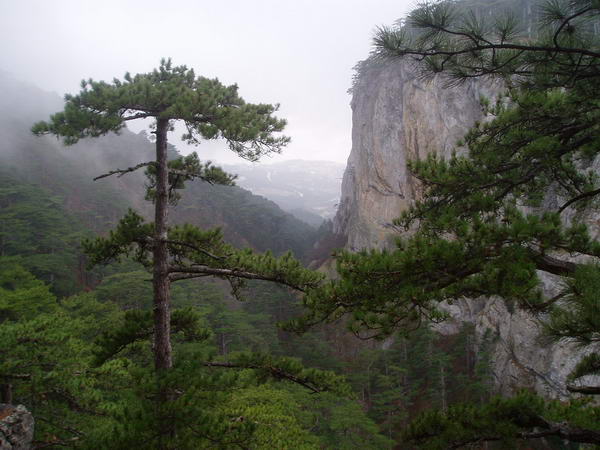 4 day of a campaign - on January, 5th.
To go further on road it would be boring also we have decided to go down on gorge. Its streamlets, snowdrifts and wet stones have considerably recovered travel. It is necessary to say, that the gorge has appeared very picturesque, especially its bottom part. It is strange, that in guidebooks across Crimea to him it is given so not enough attention. In fact from here a hand to submit up to Yalta, and kinds are not worse at all than in the Grand Canyon. As far as I have understood, from local streams water acted in Alexander's palace 3 in Massandra. Numerous wells and pipes left to the left, we have followed them and have appeared in settlement Soviet (he sanatorium Dolossy). Therefrom on bus to Yalta and then trolley bus before turn on Laurel. What for? I was going to to open for myself Ayu-Dag (the Bear mountain). Discover it was necessary late at night and under a rain. For 2 hours we have risen on top of sacred mountain and have broken camp in the middle of a wood. 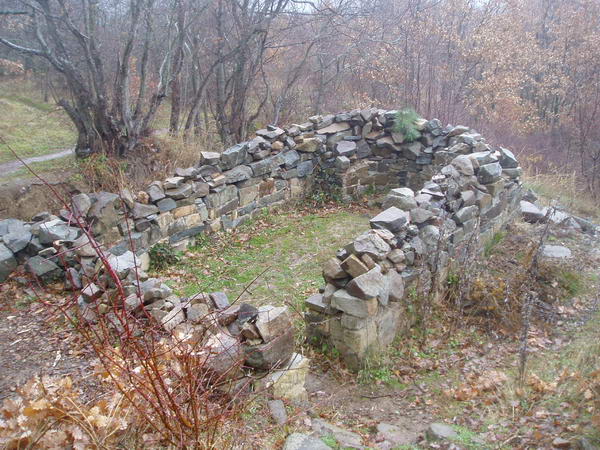 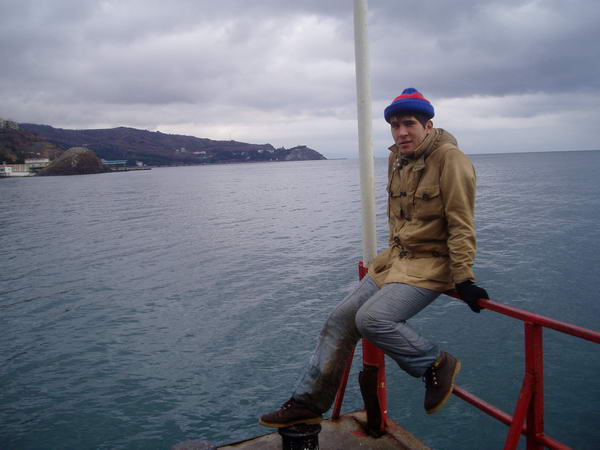 5 day of a campaign - on January, 6th.
I hoped with Ayu-Dag to see mountains. But clouds and have not dissipated. Moreover, they have lowered still below - up to 600 meters. But me had no time for grief, it was necessary to investigate district. It has appeared, that on mountain it is marvellously pure, that practically is not present viewing places and all is closed by a wood, that in a wood set of the rests of medieval structures and fortifications. Having bypassed all Ayu-Dag we have gone down in Partenit. More precisely in sanatorium of the Ministry of Defence. Rather beautiful sanatorium - with palm trees, a bamboo and other exotic plants in well-groomed park. Having sat it is a little at the sea, we have got under way in a way back. To Kiev.
+38 097 327-86-98