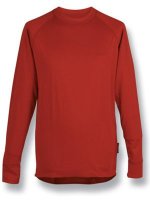 we had a tradition to name functional linen for playing sports by a word "termobelyo". It is not absolutely correct, but the tradition is tradition. The attachment "termo" confuses the buyer and often questions are asked: " As this linen is strong heats? " Or " at what temperature to me it will be warm in this linen? ". Except for warming the functional linen can carry out still flock of other functions, but times has developed "termobele" so let for simplicity and will be. But it is not necessary to forget, that " the Functional linen " is more correct. Classification of functional linen.

1. Classification as a material (it is not dependent on thickness) Functional linen can be executed from poliestra (lavsan), polypropylene, a wool, a clap(cotton) or their admixtures. Cleanly synthetic materials allocate(remove) a moisture is better, are more longevous. Addition of a clap(cotton) or a wool does(makes) linen by more pleasant in a toe. The modified polypropylene for today the most successful material for linen - he possesses practically zero absorbency and consequently is better allocates(removes) a moisture.

The functional linen can carry out some functions - to heat, allocate(remove) a moisture or both that and another at once. At physical work the skin of the person allocates enough plenty of a moisture which, collecting in a tissue of ordinary linen, sharply reduces it(him) teploizoljatsionnye properts. Plus is spent for warming and vaporization of this moisture to it(this) additional energy. It is especially appreciable at employment(occupations) by water kinds of sports when the moisture gets also from the outside. Here important there is that, for example polypropylene at all does not imbibe water, and you do not spend energy for warming of this water - she quickly flows down also linen dries up for few minutes even on a body, without sensation of a dyscomfort.
I.e. the modern functional linen effectively allocates(removes) a moisture from a body (either in an atmosphere, or in external layers of clothes), that reduces teplopoteri an organism in cold weather and adds sensation of comfort.
Series of linen of the raised(increased) thickness, except for abduction of water, have sufficient teploizolirujushchie properts that allows to use them as sweaters.

Traditional variant of utilization of functional linen is its(his) utilization in the form of the first layer in laminated(multilayer) system of clothes It is the system of clothes standard on today, which means utilization of several (from 1 до3-5) layers of clothes where the basic purpose(appointment) of the first layer is tap(removal) of a moisture from a body, the following layer is normally carried out from Polartec and provides a thermoregulation and following provides protection against a wind and atmospheric precipitation and is carried out from membranous tissues of type Gore-Tex. Various intermediate variants are possible(probable) also.

Properts termobelja depend on five components: contents of a tissue, weaving of a fiber, weaving of a tissue, type of processing, breed and quality of tailoring.
Contents of a tissue - as it has been already told, one of the best materials for today is polypropylene. Concedes to him polyester a little.
Weaving of a fiber - practically all modern tissues for termobelja are executed from a microfiber is very thin fiber of various section which, being weaved into a tissue, frames unique sensation of comfort owing to high density of villuses.
The type of processing - quality linen necessarily has special antibacterial processing for decrease of a unpleasant odor at long a toe. On a background of ordinary impregnations fiber TG900 is allocated. Granules with antibacterial contents are included(switched on) in structure(frame) of a fiber and provide more long action. But, unfortunately, all these contents are not so longevous and after 2-5 washings are washed away - as to not erase linen it will not turn out.
Now some advice(councils) at the choice of linen.

1. If you need linen for daily toes(socks) that is possible to choose practically any - woolen, with addition of a clap(cotton), cleanly synthetic, etc. It is necessary to not be mistaken only with a choice of thickness - thin linen for warm time, thick for winter.
2. If you the sportsman the mountain skier, snoubordist or take a great interest in winter fishing that a correct choice will be, both linen with addition of natural fibers, and cleanly synthetic. For you important is, as ability of linen to allocate(remove) a moisture, and it(him) teploizoljatsionnye properts.
3. If you the climber, the tourist, kajaker, jahtsmen your choice is limited 100 % by synthetic tissues and in the winter and in the summer. Only such linen is capable within many days at continuous a toe to provide comfort and warmly.
And more time about the main thing. The functional linen first of all should is effective to allocate(remove) a moisture from a body is its(his) main task. To achieve heat it is possible and by means of a sponge, but she will not replace quality linen.

In the world flock of firms make functional linen: TG 900 Moira, Litex, Levron, Helly Hansen, Craft, VauDe, Lowe Alpine, Big Pack and many other things. Quality of linen of these and other dear firms very highly and on propert they differ very slightly that it is impossible to tell about the price. For example, the kit рубашка+штаны Moira costs(stands) 44 ue., and Helly Hansen nearby 100 ue. It does not reflect a difference as and properts - the price depends on marketing policy(politics) of firms of the producer and the seller and from "raskruchennosti" the trade label.