Simena is the name of a small Lycian city that went under water as a result of earthquakes. On the site of that part of the city that remained above the water, there is now a small village, the main attraction of which is a fortress on a hilltop. It was this fortress and the flooded city itself that predetermined one of the main occupations of the villagers - serving tourists. There are not many inhabitants - no more than a hundred. And it seems that each house has its own pier, and then cafes, restaurants, souvenir shops. 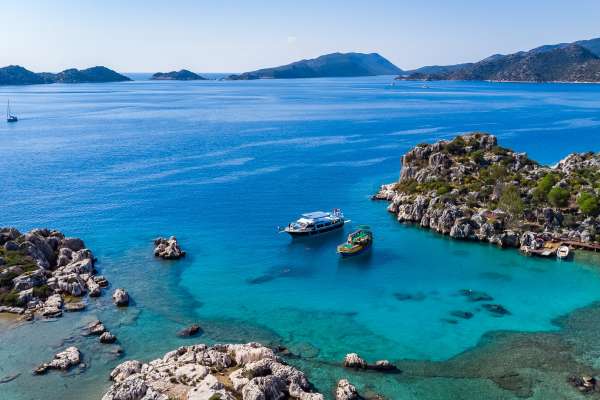 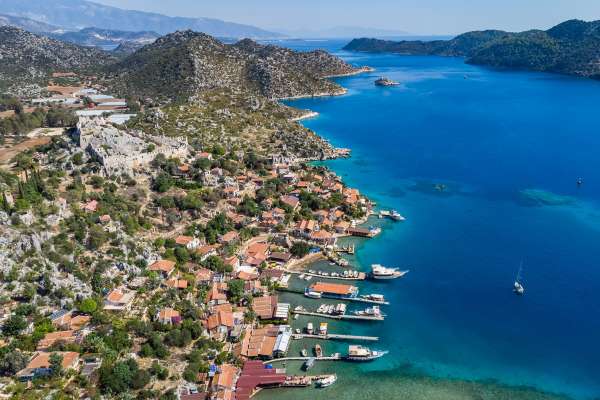 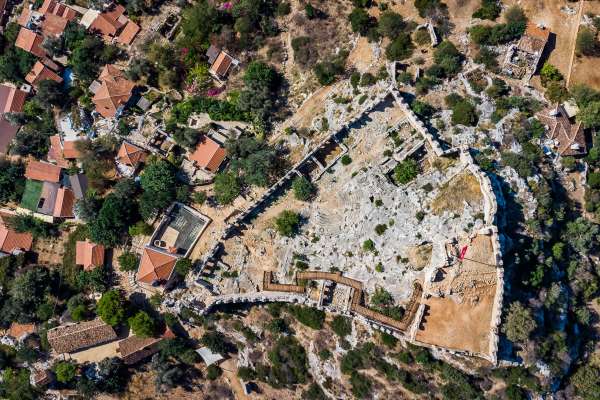 The fortress is a museum object, well restored and equipped, the entrance is paid accordingly. Inside is the smallest ancient theater, only for 100-200 people, and completely carved into the rock. At the top there is an observation platform and there is an old cast-iron (not sure) cannon. And most importantly, from this peak, stunning views of the area, from Aperlari to Andriake, open up. And given the transparency of the water, the remnants of the city at the bottom are perfectly visible.

Sarcophagus. Behind the walls of the fortress is perhaps the most popular attraction, it is also the hallmark of the Lycian trail - a sarcophagus completely standing in the water. The sarcophagus itself is nothing special, the design is the most ordinary, but its location in the water makes it attractive. In principle, as in any Lycian city, there are enough sarcophagi in the district. 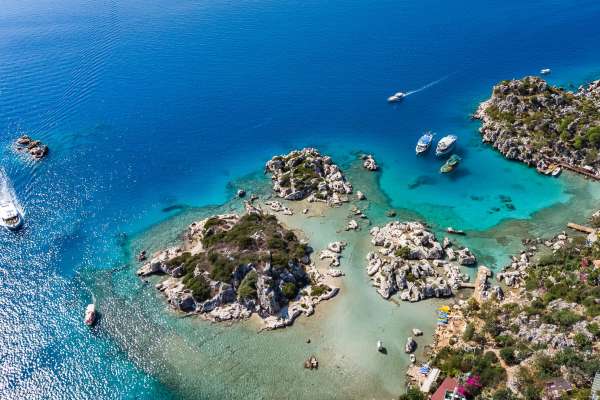 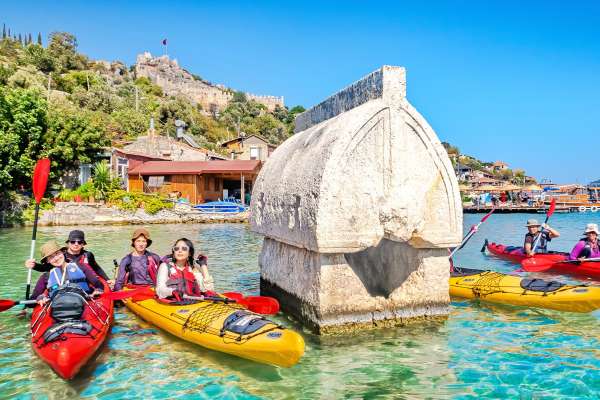 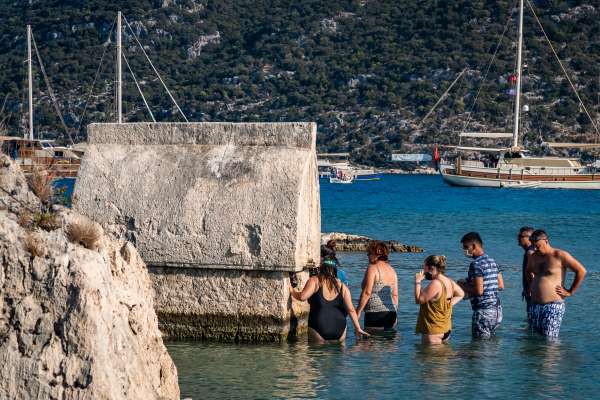 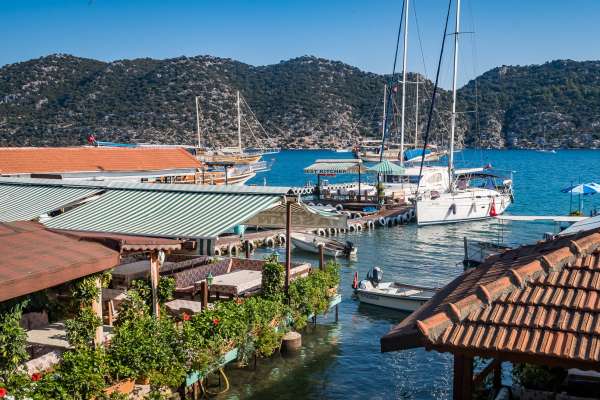 How to get there

Motor transport. There are no roads to the village itself, and from the nearest road you will need to walk. On a rented car, drive to the village of Uchagiz (Kekova / Uchagiz) From the central square, where the main pier with boats is already clearly visible to the fortress. You need to turn to go around the bay (turn behind the toilet) When you go around the bay, stop near the Muslim cemetery. And then walk up to a well-visible fortress.

Public transport. Again, you need to come to Uchagyz. Dolmushki go there from Demre (though only one a day). Then, too, bypassing the bay, only on foot. By the way, you will follow the markings of the Lycian trail.

On foot. If you are traveling along the Lycian Way, then you will not pass by Simena. Moreover, the fortress itself will serve as a good guide for you. From the east, Simena can be reached from Andriake in half a day. From the west of Aperlari, also about the same time.

By sea. This is perhaps the most convenient way. As already mentioned, there are enough moorings in Simena, right under the fortress. The nearest pier from where sightseeing boats go to Simena is the Andriake Yacht Club, 5 km from Demre. The next one is the city of Kas.. 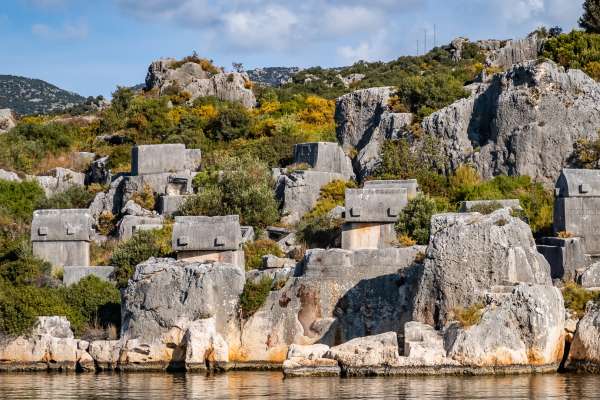 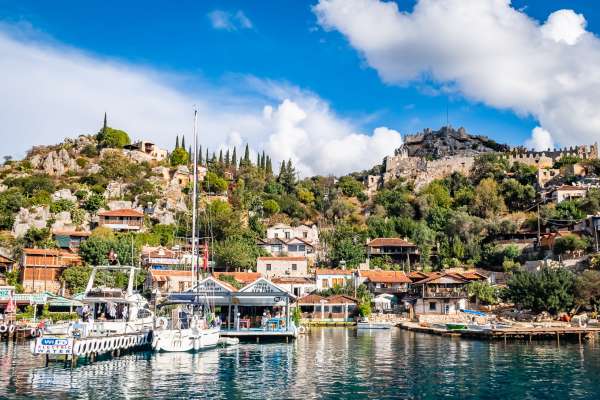 There are no classic multi-star hotels in the entire district, there are small family pensions, both in Simena itself and in the neighboring village of Uchagiz. Uchagiz is better in this regard - there are several mini hotels and even a couple of grocery stores. And there are just too many cafes and restaurants.

I immediately warn you that swimming, swimming, diving is officially prohibited in the Simena area! The sea and especially the bottom is an archaeological monument! Go to the fortress, inspect its surroundings. If you still want to explore the underwater ruins, there are a couple of ways. The most convenient is to rent a kayak and walk on it over the flooded part of the city! The water in the Simena area is usually exceptionally clear, and you just kayak and look down at the bottom. You can even take a picture. Especially good in calm weather.

The second option is to rent a boat or a boat, and walk not only in the Simena area, but also in the Aquarium area and of course to the island of Kekova. There are even specially equipped vessels with transparent windows in the underwater part of the bottom of the hull! And they go both from Simena, and from Andriake and Kas. During such a walk, as a rule, there is also a stop for swimming from the side! 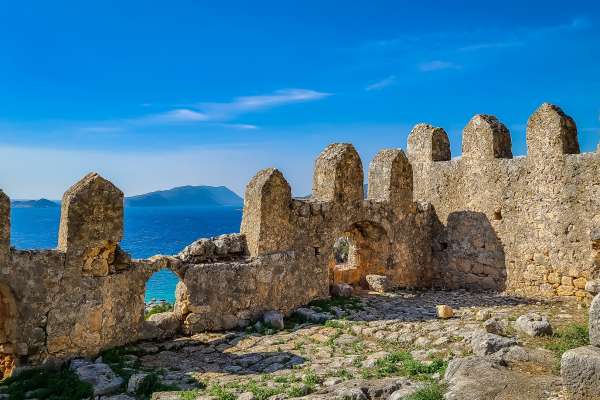 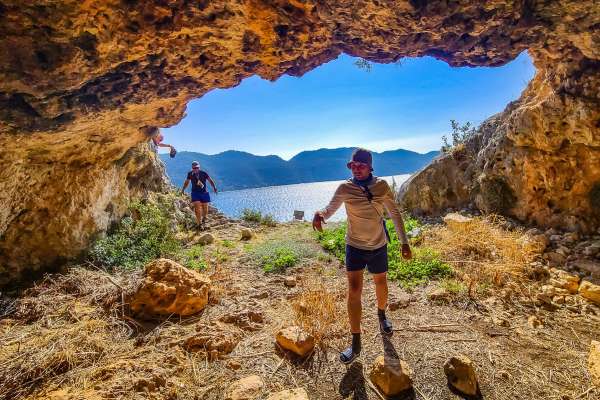 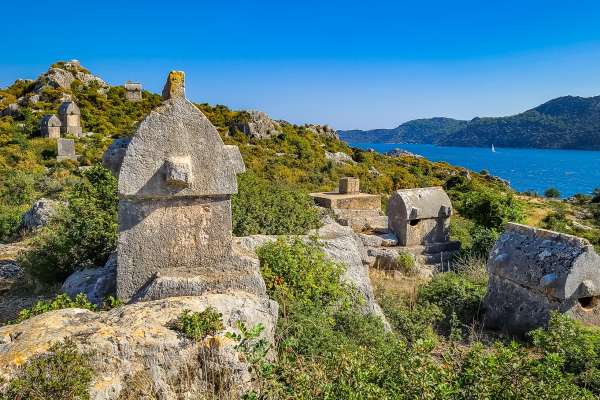 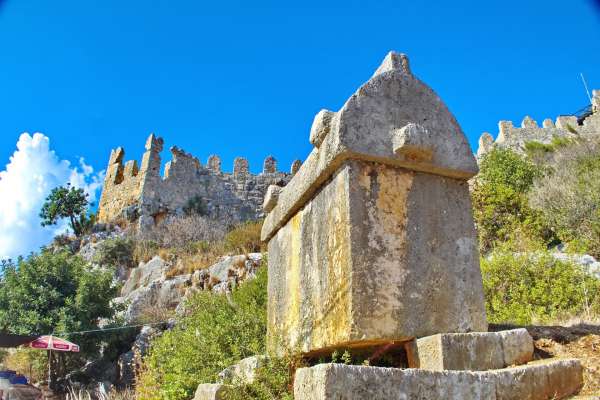