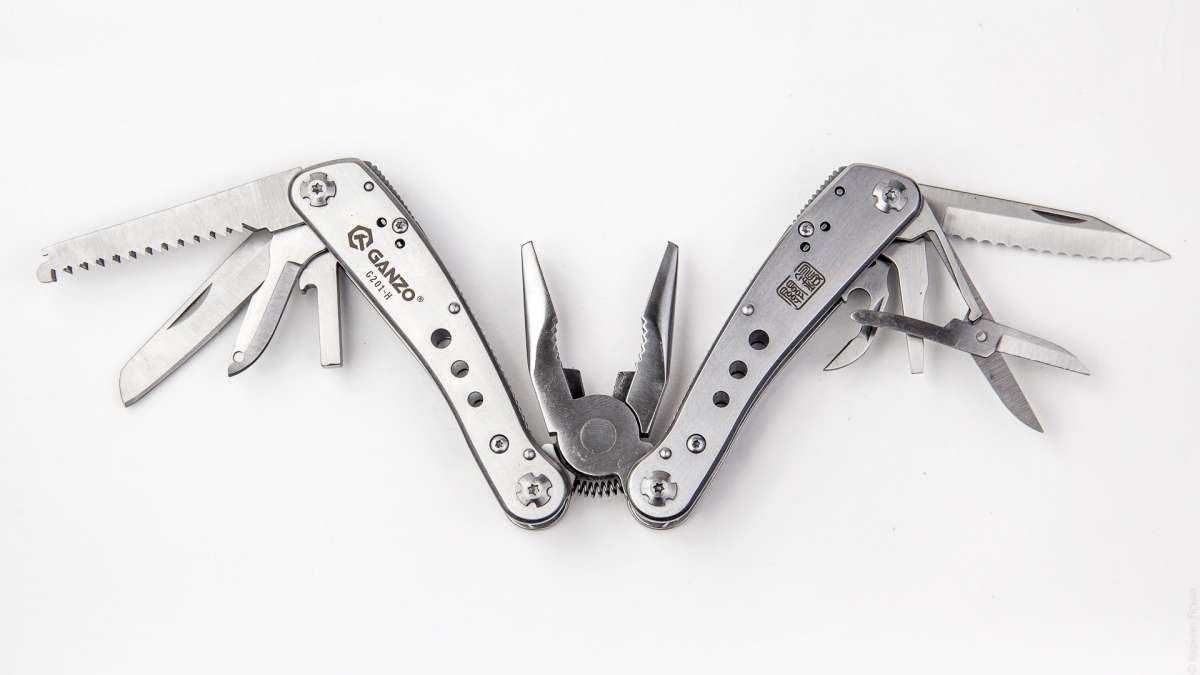 Multitool Ganzo 201-h looks great - everything is done neatly and beautifully. Tool shining metal, nice cools the hand and due to its massiveness gives the impression of a reliable and expensive things. In this respect, to Ganzo 201-h no complaints. We can safely recommend it as an inexpensive and at the same time spectacular "male" gift. But the functionality is not so simple...

Everything is relative, and cheap Chinese multitul it would be logical to compare with some American Leserman (or similar) the value of which is 5-10 times higher. But in my Arsenal, there is no such tool and so for comparison I will use some elements of your camping knife Victorinox. 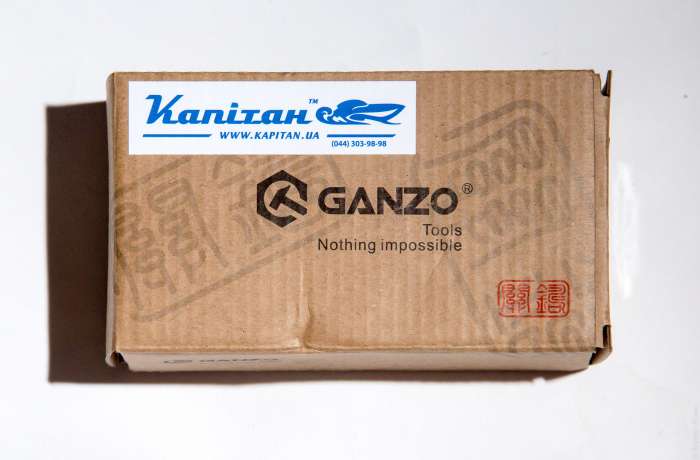 Multitul packaged in a box made of thick cardboard. The delivery set includes: 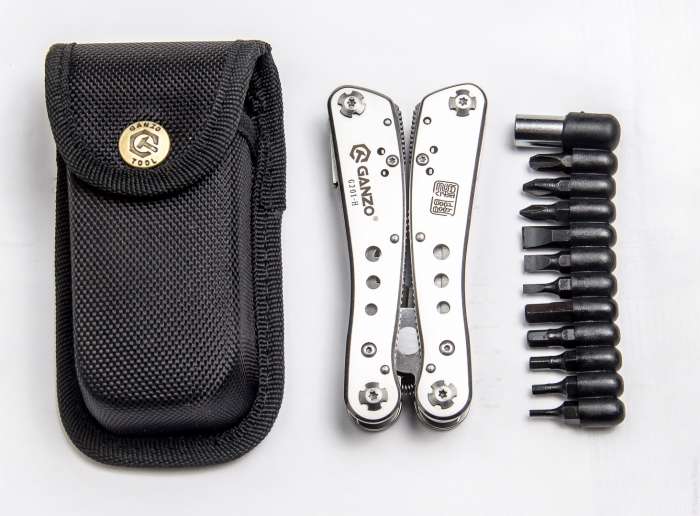 The case is made from heavy Cordura, it has two compartments for bits and for multitude. The partition between two compartments thin and sometimes crushed when you try to paste back a clip with bats. On the rear surface of the cover there are 3 loops so that it can be clipped to belt both vertically and horizontally. The valve closes on the button. And although it is quite durable, but personally, I still would not dare to wear it on the belt cover in a horizontal position. 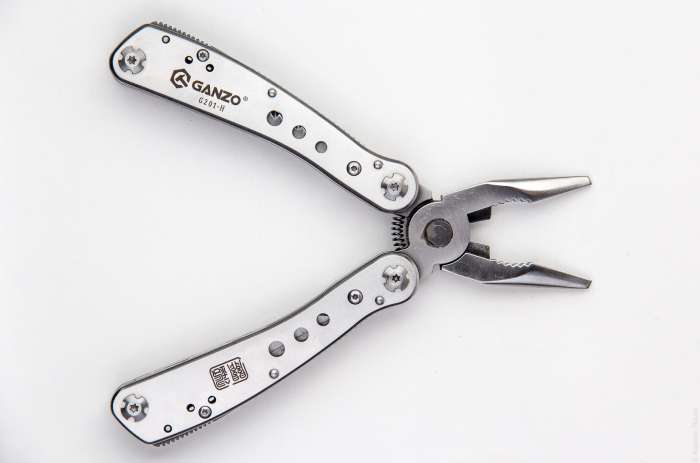 The pliers are spring-loaded, which is quite convenient. Maximum opening is about 35 degrees (30 mm between the ends of the jaws, 20 mm in the area of the toothed notches). At the base of the pliers are traditionally cutter. But the cutters of the cutting wire on the side of the hinge no. 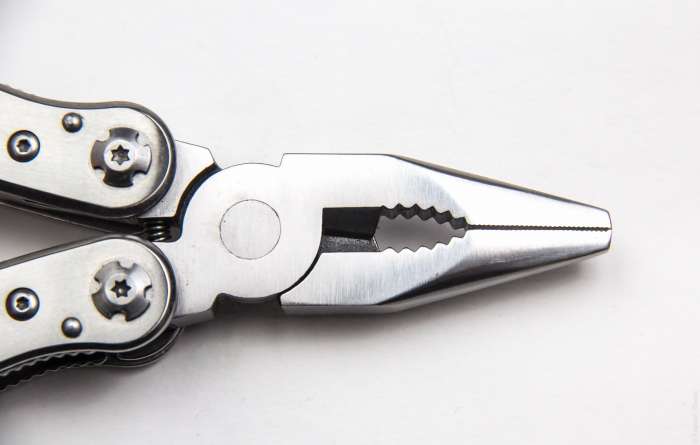 Screwdriver bits inside the factory packaging liberally lubricated with machine oil (not impactites). In a flexible rubber clip is stored 10 - bit-3 Phillips screwdrivers, 3 straight and 4 of the hexagon. Oh and a magnetic adapter on the "square" is available in multitude. 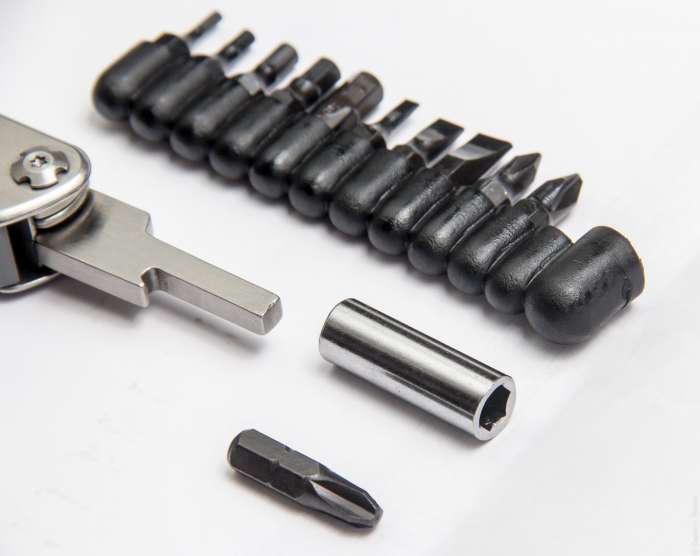 The knife, as well as all other additional tools in multitude Ganzo 201-h does not have a latch. This item appears only in more expensive, "three hundred" series multitool. The length of the cutting surface of the blade about 5.5 cm Thickness of a butt is 1.5 mm Blade pentagonal in cross section. The shape of the edge of the blade - "sheep's foot". To assess the quality of sharpening and blade material I do not presume paper knife cuts and thanks for that. 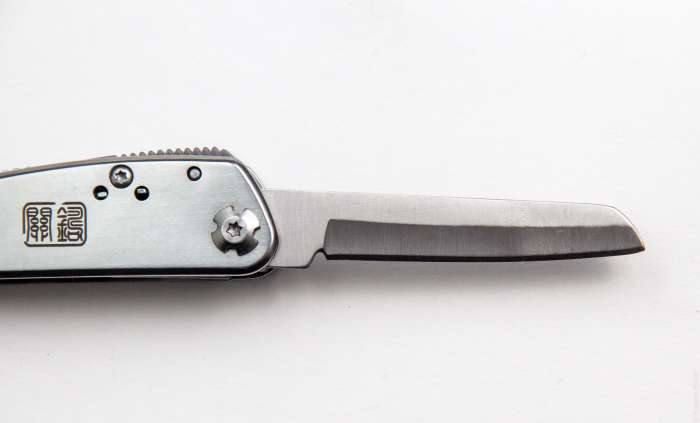 Knife-hook knife (serrejtora) - serrated blade for cutting fabrics, rope and other fibrous materials. And they say, tomatoes good for them to cut :) 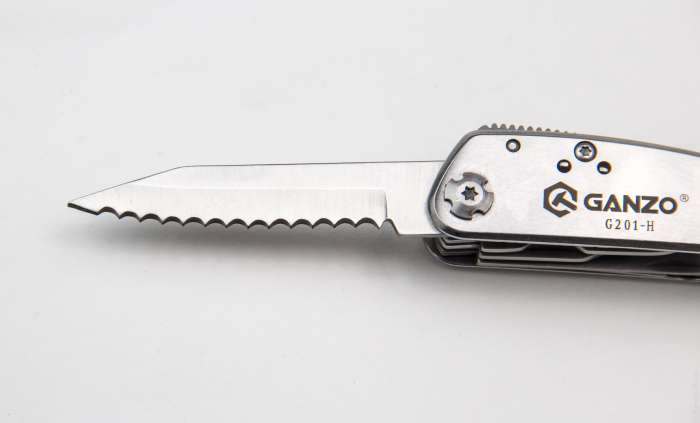 Scissors with a spring of original construction. At least I had not met. This spring is harder to break, but it takes a lot of space (more than the classic spring from Victorinox) and takes almost 0.7 mm thickness at the handles of the scissors. Because of this loss of rigidity. Additionally, the lever that you need to push your finger to work the scissors, Ganzo twice thinner than the Victorinox. If long enough to run with scissors through a solid material, the pain in your thumb is almost guaranteed. The main thing is that the cutting surface is more reminiscent of not manicure and stationery scissors for paper. The profile of the blades of the scissors Ganzo not beveled (stamaty), and perfectly rectangular (blunt). So, to cut their nails will be very difficult. 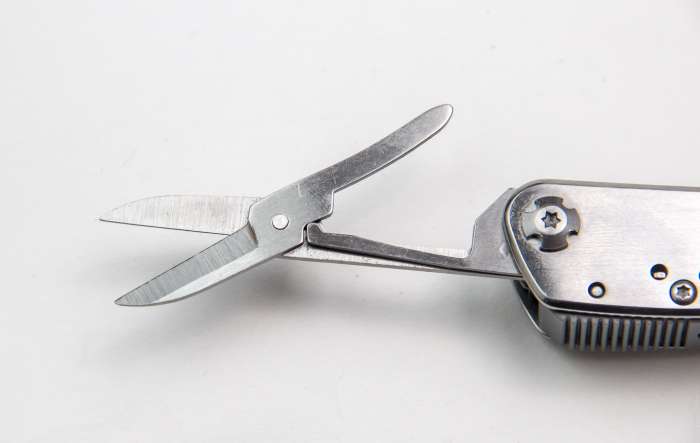 The next tool combines the opener bottle opener, can opener and a device for Stripping a thin cable. I was more comfortable with a different type of can opener is not a "Fang" cutting back, and the "shark fin" reguli forward. But I think it's a matter of taste and principle irrelevant. 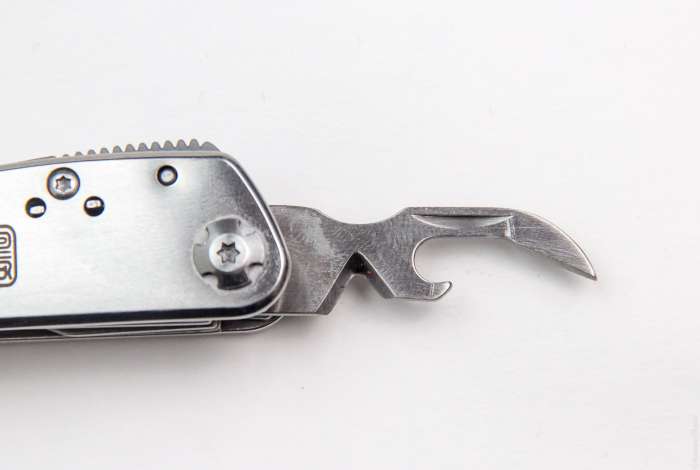 Narrow straight screwdriver in addition to bits. In my opinion, it's a little disproportionate. The sting is quite thick, calculated on a deep slot, but the width of the tip at this small, powerful screw is not turning on. It turns out that "neither there nor here" - not hours, but still not power screwdriver. 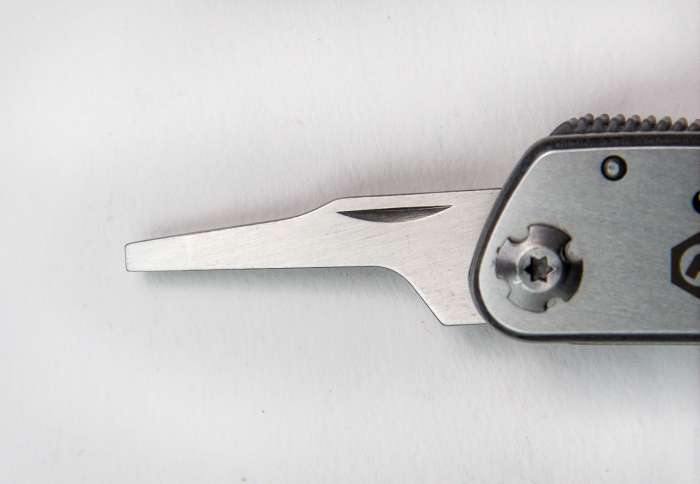 There is an awl with a hole (loop). The hole close to the edge, that's good. But the very edge of the sewing is not too pointed and very wide (8 mm at its widest point). It is not clear what materials are expected to Duravit with such a massive sewing. 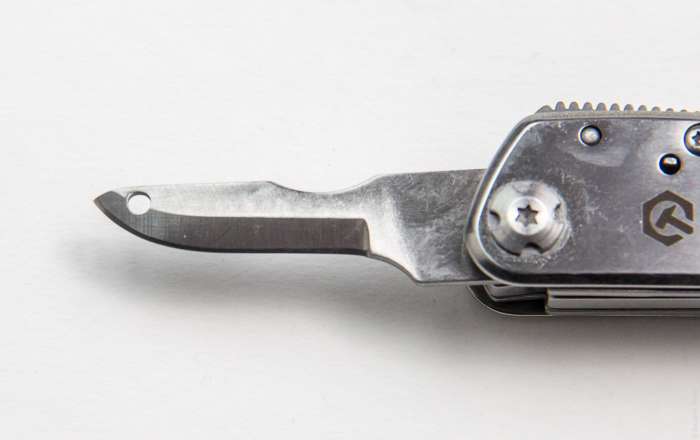 The length of the working surface of the saw is only 4.5 cm. This means that you will be able to more or less comfortable sawing branches, the thickness of which does not exceed 2 inches. 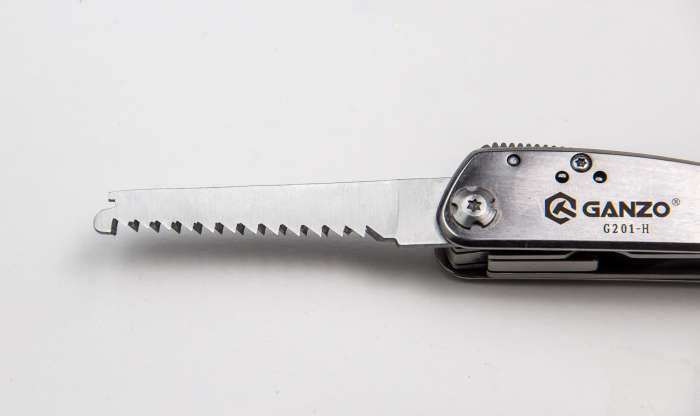 According to my measurements, multitool itself weighs gr, and the weight of the complete kit with case and bits) is 380 grams.

What multitool to choose?

Model number Ganzo has about a half dozen multitool. When the online store Captain asked me to write a review of one of multitool Ganzo, I compared models available (photos and descriptions on the website) and came to the conclusion that they are all very similar and differ only in the design. Yes, the three hundredth series has a clamp for the blade, but otherwise the differences are minimal. Perhaps a more detailed comparison of actual samples I would've changed his opinion, but so far as the real criteria for selection, I consider only the aesthetic preferences (appearance) and the weight of the tool (from 85 to 280 grams excluding accessories).