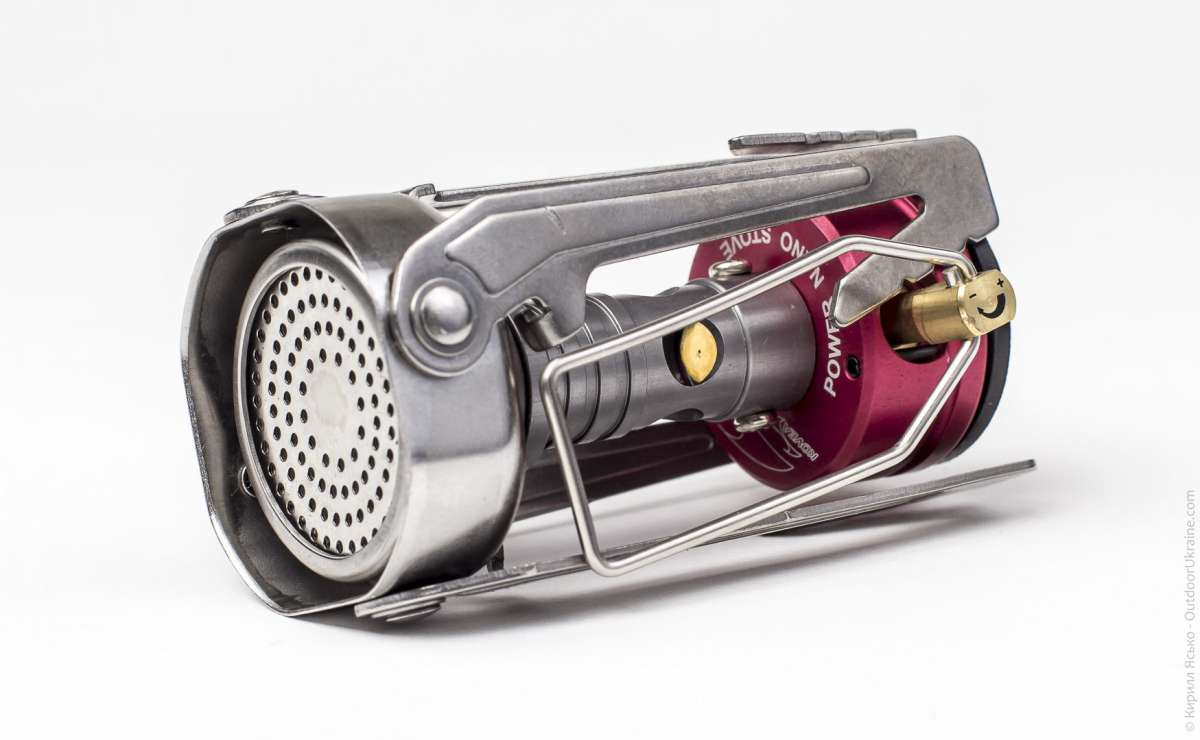 Review miniature tourist torch Kovea Nano Stove designed for threaded gas cylinders. It weighs a little less than 100 grams and, according to the results of our measurements, is able to boil a liter of water for 5.5 minutes spending 20 grams of gas.

In the delivery set includes the stove itself, a protective plastic case and quick start guide in English. Weight burners 97 grams, the case weighs 20 grams. 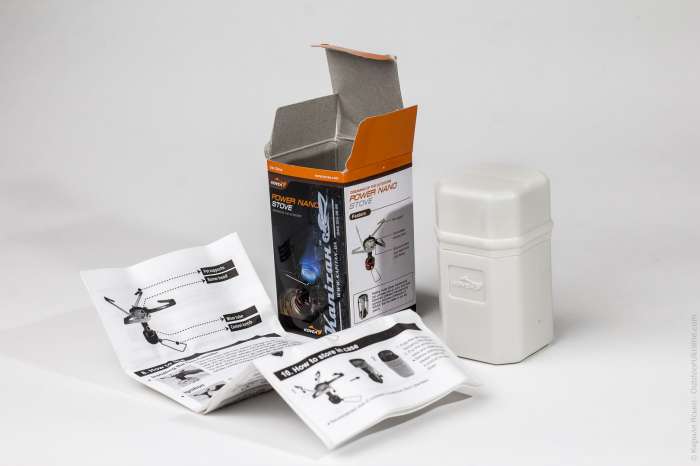 Cover case sits tightly, an accidental discovery excluded. In order to get the torch from the case, you may need a slight shake, as the gas valve burner lightly clings to the sides of the case. For the same reason zapihivanie in the case also does not always go smoothly. 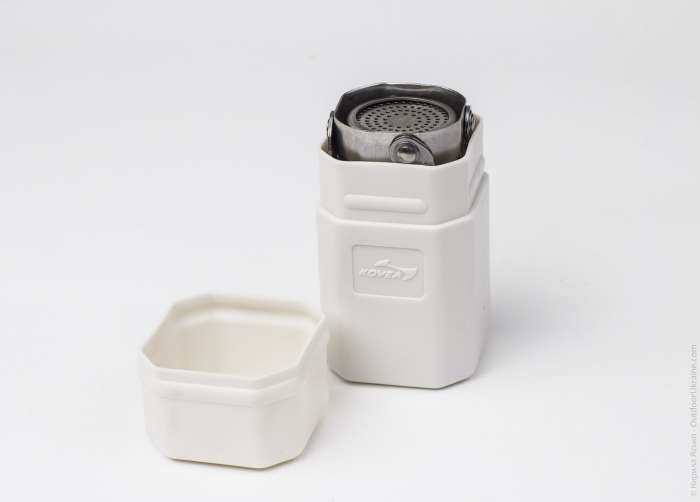 At the bottom of the case, why it made a large hole. And if you accidentally put the case with a torch in the dirt (sand, in a puddle, in a bowl neighbor), then the garbage freely get into the Holy of holies, i.e. on the thread. A strange decision... 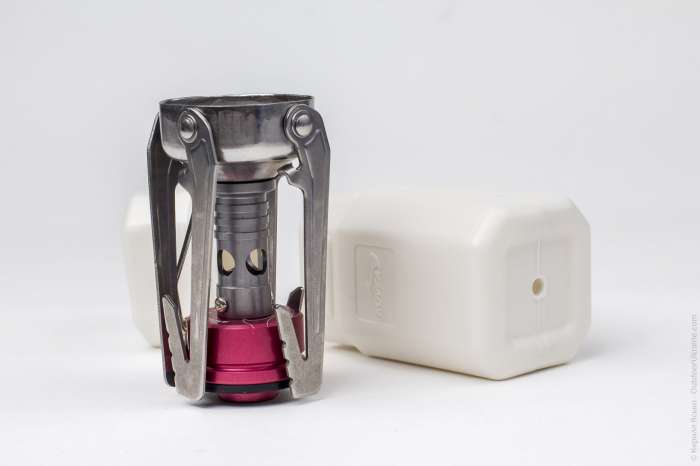 Folding legs supporting the dishes, made of a rather thin and flimsy looking steel plates. In practice, however, the design proved to be quite rigid and stable. The final span of 12 inches. I think if you act carefully, if you wish, you can even put a bucket of water. That however would not have a practical meaning, so as to heat on the stove utensils displacement of more than a few liters - employment is extremely wasteful and inefficient. 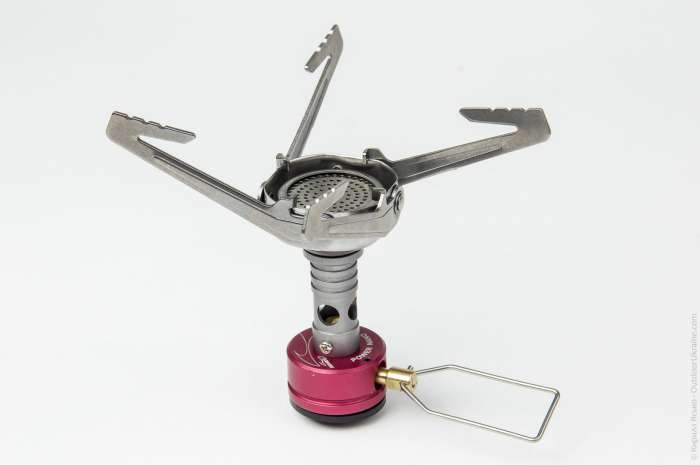 Because the trajectory of the expander adjacent legs of the burner is crossed, then to bring them into position you will need two full "circle". I.e. for each leg will have to hold out at least twice :First in turn raise them vertically, then drop in the opposite direction (counterclockwise) until the latch reaches the ground. 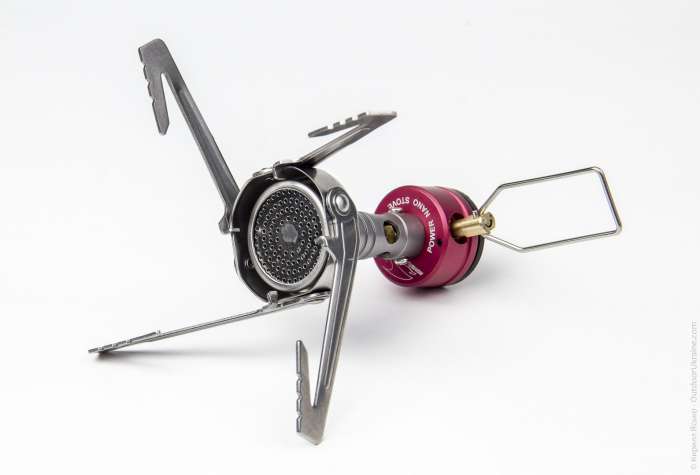 The handle of the gas valve had no complaints. Wire frame provides sufficient rigidity to securely tighten the valve even holding the tip of the handle. 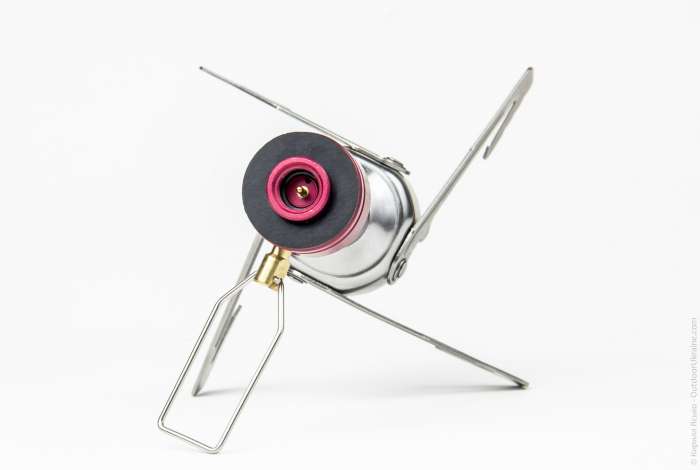 A little about the obvious... you guessed it, the burner is screwed directly onto the gas cylinder. Well, the bottle must be threaded. This burner no pezopodzhiga that in my opinion is not a disadvantage. 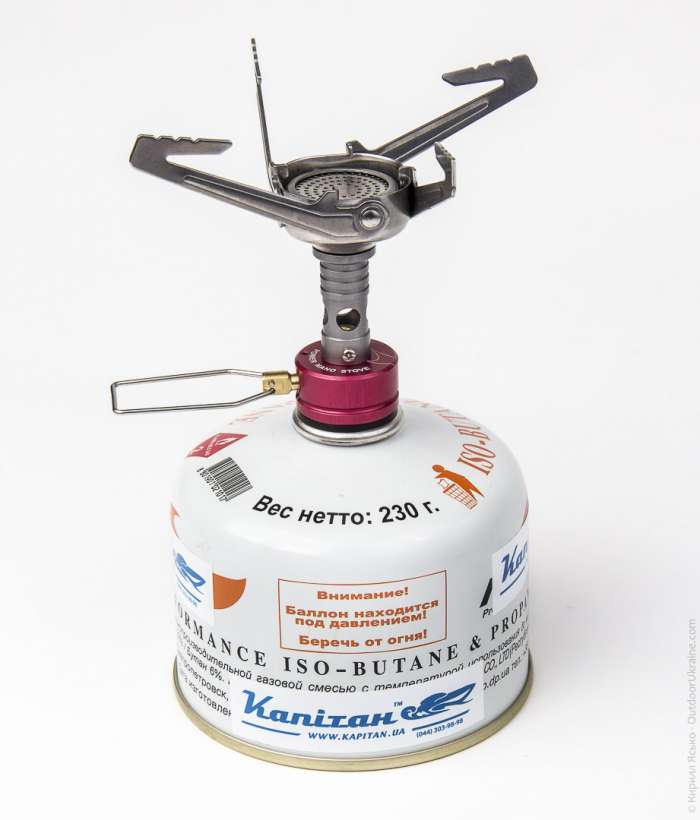 Injectors are very compact and in the same plane. In fact they do not dissipate the flames, and focus it into a single jet stream. Of course, when put on top of the pot, the fire Willy-nilly "spreading" on its bottom. However, the chance of burning food in thin-walled ware here is of course higher than the "wide" burners. 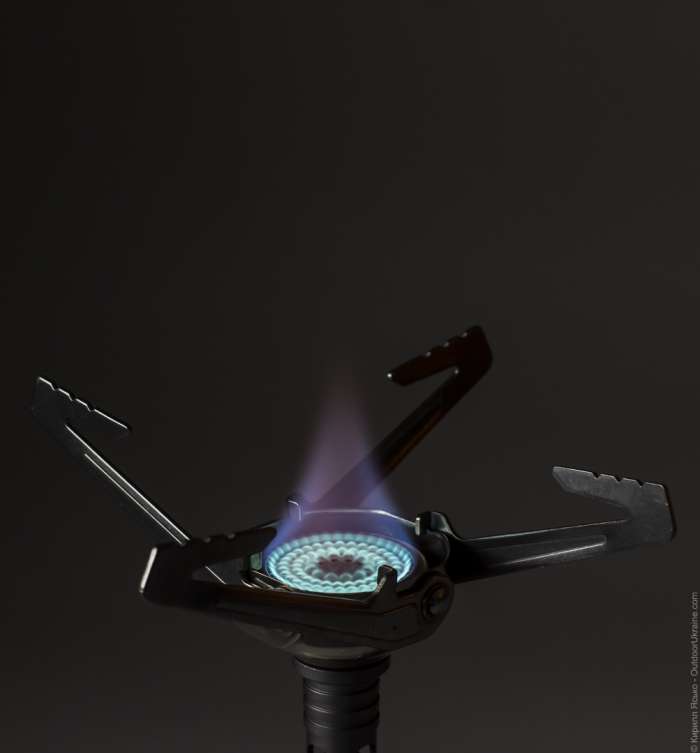 As part of testing, we decided to find out how much time and fuel will need the burner to boil 1 liter of water. Measurements (there were several) was held indoors at room temperature. Water was quite spring, i.e. cold - about 10 degrees Celsius. For water, we took a small pot with a diameter of bottom only 1 inch of the large width of the supports of the burner. Its capacity of just 1 liter. To control the flow of fuel gas tank were weighed before and after each experiment. 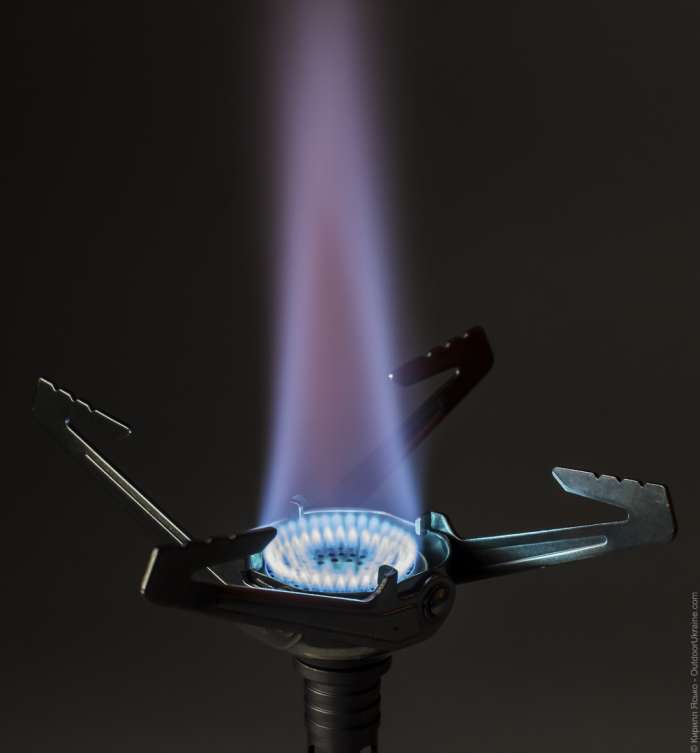 At high speeds (when fully open valve) device is very loud and annoying noise (louder than my petrol burner). It is therefore not surprising that in the first experiment boiling took a whole 9 minutes. Apparently, based on the level of noise I'm just not fully opened valve. So prolonged boiling in a "greenhouse" room conditions seemed strange to me and when the following measurements I have already turned the faucet until it stops. The best time to boil one liter of water, which was achieved during the test was 5 and a half minutes. If this were spent 20 grams of gas. If the rough (i.e. without changing the gas pressure and temperature) to extrapolate these figures, the per hour at full speed torch Kovea Power Nano Stove consumed 218 grams of the gas, i.e. almost all "medium" tank.

By the way, if you don't chase the rate of boiling and be limited to the average position of the valve, the gas flow will be reduced by at least 25%. In one of our experiments the water is boiling in 8 minutes and 17 seconds, which spent just 15 grams of gas. I think if you experiment, you can pick up even more economical programs boiling. 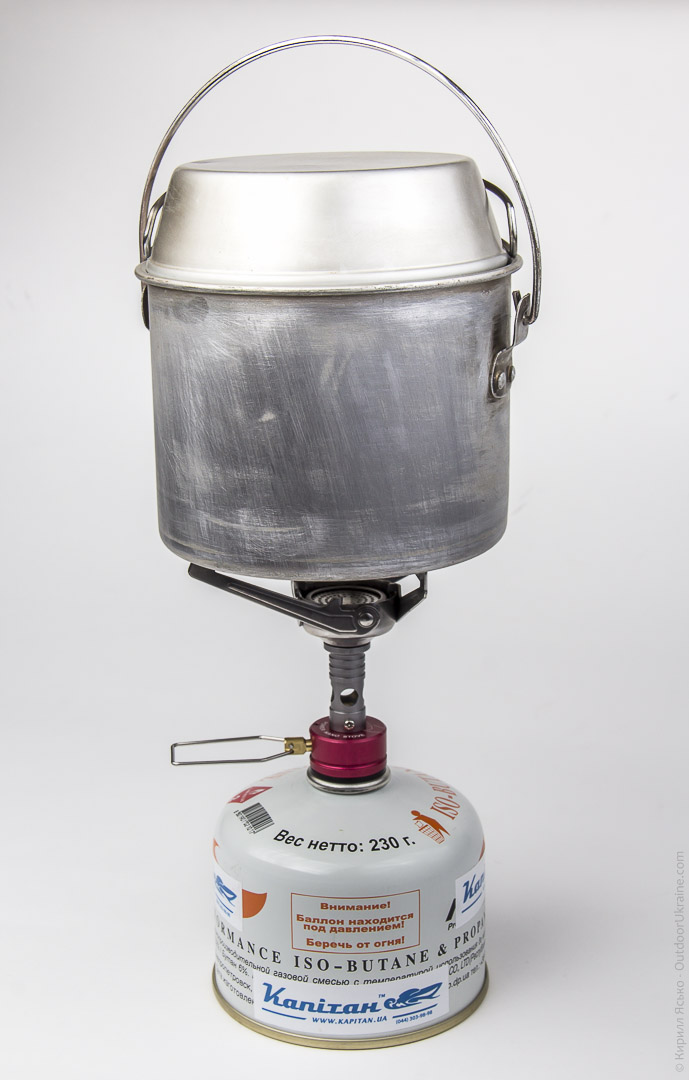 Burner and gas bottle for this review it was courtesy of the Internet-shop the Captain. To read their range using the links below.